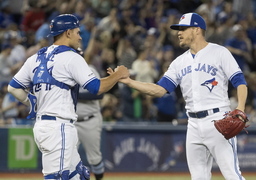 TORONTO (AP) Luke Maile knows how tough Blake Snell can be, having caught him many times during two seasons with Tampa Bay.

Despite their friendship, Maile said the only thing going through his mind during the at-bat was protecting his health.

"Honestly, the only thing I was trying to do was make sure I stayed on his fastball," he said. "That's just for self-defense really. If you don't stay on his fastball, good luck."

Lourdes Gurriel Jr. hit a two-run double off of reliever Chaz Roe (0-2) in the seventh inning to provide the winning margin, while Teoscar Hernandez added an insurance run one inning later.

Reliever Thomas Pannone (1-2) got the victory after pitching a scoreless seventh, while starter Clay Buchholz earned a no decision in his Blue Jays' debut. Ken Giles got the last three outs for his fourth save.

Despite failing to get a decision, Snell continued his stellar form since allowing five earned runs on opening day, with a 0.47 ERA in the 19 innings he's pitched since. The reigning AL Cy Young Award winner has 33 strikeouts in those three starts, including nine on Saturday.

Though disappointed at being pulled after just 82 pitches, having pitched last Monday in Chicago, the right-hander said he has nothing but confidence in his team's coaching staff.

"It was a shorter week for me to get ready and this is their plan," he said. "I believe in it 100%. It's all about longevity and that's kind of why that move was made."

It was the fifth time this season that Toronto has been no-hit through at least five innings, but the first time the Jays recovered to earn a victory.

In some ways, Snell's brilliance on the mound is becoming somewhat routine to the rest of his teammates.

"Amazing. One hit. Six innings. That's just typical Snell," said shortstop Willy Adames, who scored the Rays' only run. "We've seen that over the last year, so we're kind of used to that. When it doesn't go like that, it's weird."

Seeing his first action of the season after starting the year on the injured list with an injured right elbow, Buchholz lasted six innings, limiting Tampa to one earned run off six hits, striking out two.

The right-hander said he's learned to moderate his intensity since his last start in the majors, when he was with Arizona last September.

"I've done it a couple times where I've gone out and it's a max effort every time you throw and I think hard times come from that," he said. "So I used a little bit of what I grasped in Arizona - less is more sometimes."

After a franchise-record seven consecutive games of scoring a first-inning run, the Rays came up short on Saturday. That also brought an end to their streak of holding a lead at the end of 45 consecutive innings, the longest such streak for an American League club since Baltimore did so for 55 straight innings in 1983, according to STATS LLC.

Ji-Man Choi was caught stealing in the first inning, ending the Rays' perfect run after being successful on a franchise-best 14 consecutive attempts this season.