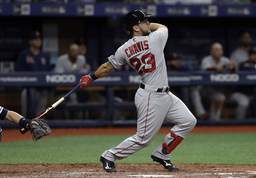 ST. PETERSBURG, Fla. (AP) - Perhaps the Boston Red Sox will look back at this weekend as the games that got their title defense back on track.

The World Series champions won a series for the first time this season when Andrew Benintendi hit a grand slam and a tiebreaking ninth-inning sacrifice fly and catcher Christian Vazquez picked off Tommy Pham for the final out in a 6-5 win over the Tampa Bay Rays on Saturday night.

"These are the games that we expect to win, and the last two days we've grinded out at bats and came out on top," Benintendi said. "We'll figure some things out and once we hit our stride, it'll be a lot more fun."

Boston had lost four of its first six series and split the other two during a 6-13 start, its worst since 1996. The Red Sox beat the AL East-leading Rays 6-4 in Friday's series opener.

Before the game, the Red Sox put right-hander Nathan Eovaldi on the disabled list because of loose bodies in his pitching elbow and said it has not been determined whether he will need surgery.

Rick Porcello gave up two runs and six hits in 5 2/3 innings, Matt Barnes (2-0) won after allowing Yandy Diaz's tying home run leading off the eighth, and Ryan Brasier got his fifth save in six chances after getting into trouble.

Daniel Robertson singled leading off and Pham singled with two outs. With Steve Pearce playing off first base, Willy Adames fouled off a pitch, and Vazquez, who had just entered in the middle of the ninth, received the second pitch and fired to first.

"All I'm going to say is I messed up," Pham said. "Just learn from it and never let it happen again. There were some key situations for me, and I didn't come through today. I messed up all around - hitting and on the bases today. I'll make up for it."

Boston is no stranger to game-ending pickoffs. Koji Uehara picked off Kolten Wong of St. Louis at first base to end Game 4 of the 2013 World Series.

"I saw on the foul ball on the pitch before he a big lead, and I gave the sign to Pearce," Vazquez said. "Why not? If Adames got a hit, it's a tie game. We got the chance, and we did it."

Boston went ahead in the ninth against Jose Alvarado (0-1) after Jackie Bradley Jr. singled leading off. Michael Chivas, a 23-year-old taken with the 26th overall pick in the 2014 amateur draft, pinch hit in his major league debut and doubled. Benintendi followed with his go-ahead fly.

Chivas spent his first full day with the Red Sox after his delayed flight from Syracuse caused him to arrive in the third inning Friday night.

"I'll be honest, I don't know what today is," Chavez said. "I flew out yesterday at 1; they told me at 11. I literally woke up to three missed phone calls, and I thought I messed something up. They said, `You're going to the big leagues,' and I was like, `No way.'"

Tampa Bay had won its first six series of the season. The Red Sox won consecutive games for just the second time this year.

Benintendi homered off Charlie Morton in a five-run second after Sandy Leon was hit by a pitch with the bases loaded.

Avisail Garcia hit a solo homer in the second, and Brandon Lowe drove in a run in the fourth with one of Tampa Bay's franchise-record four triples. Boston had not allowed four triples in a game since June 9, 1983, against Detroit. Austin Meadows hit a two-run triple in the seventh, and Kevin Kiermaier and Ji-Man Choi also tripled for the Rays - Choi left in the sixth inning because of a tight left calf.

Morton struck out nine while giving up five runs and six hits in six innings.

"We haven't had a chance to say it all season, but now we've got a chance to sweep somebody," Red Sox manager Alex Cora said.

Red Sox: 1B Mitch Moreland left in the third inning due to back spasms. ... INF Brock Holt (scratched cornea) will not be activated this weekend, as originally planned.

Rays: LHP Blake Snell (fractured right fourth toe) threw 18 pitches in his first bullpen session and is to throw another bullpen session Monday. Manager Kevin Cash didn't rule out the 2018 AL Cy Young Award winner from returning Wednesday or Friday. ... Cash said INF Joey Wendle (strained left hamstring) is ready to be reinstated from the 10-day IL but hasn't been yet because of a need for pitchers on the roster.