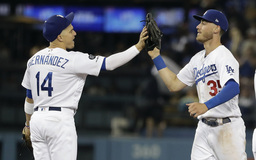 LOS ANGELES (AP) Cody Bellinger's one mighty swing of the bat was loaded with historical significance.

Bellinger hit a two-run homer in the first inning and the Dodgers set a major league record with homers in 33 consecutive home games in a 6-2 win over the Pittsburgh Pirates on Friday night.

With his total-base mark, he moved past former teammate Chase Utley, who had 85 total bases before the start of May in the 2008 season as a member of the Philadelphia Phillies. Utley, who now works in baseball operations for the Dodgers, was on hand before Friday's game.

"It feels pretty cool," Bellinger said about passing Utley's mark. "I honestly didn't know until he told me at the game today. So hopefully he is here (Saturday) so we can talk about it."

So it was Utley that informed him that a record-breaking night could be ahead?

"No, they told me in the dugout after it happened," Bellinger said.

With home runs in their first 14 home games this season, the Dodgers also matched this year's Milwaukee Brewers and the 1962 New York Mets for most consecutive home games with a home run to open a season.

Josh Bell hit a home run for the Pirates, who were otherwise held in check by Dodgers starter Hyun-Jin Ryu. The Pirates lost a season-worst sixth consecutive game, a skid that followed a five-game winning streak.

"Like I always say, it's pretty comfortable pitching at home, especially knowing how my teammates will help me in terms of putting up runs early," Ryu said through an interpreter. "That has led to successful results. And seeing that consecutive (home-run streak) definitely builds my confidence."

Ryu (3-1) struck out 10 and gave up two runs over seven innings in his second start since returning from the injured list due to a strained left groin. It was the first time the left-hander reached double-digits in strikeouts since July 13, 2014.

"He pitched us basically as we anticipated because he had good stuff, he mixed his pitches well," Pirates manager Clint Hurdle said. "He kept the ball away, he kept the ball down, the cutter played in tight. We had early opportunities we weren't able to get traction with and that hurt us."

Pirates starter Chris Archer (1-2) gave up six runs on six hits over four innings, the most earned runs he has allowed in an outing since Aug. 26 of last season at Milwaukee. Heading into the game, Pirates starters had given up 11 home runs, the fewest in baseball.

Bellinger's home run in the first was his eighth at Dodger Stadium this season. Austin Barnes added a solo shot in the second inning, his third of the season.

"If I had my slider working like it normally is working, then I'm able to (put away hitters)," Archer said. "Tonight, I didn't. I left a change-up up to Bellinger, which, you know, it happens. Anything that dude sees right now, he's smashing. But other than that, most of the damage was on sliders that I left over the plate or fastballs that I didn't locate well enough."

The Pirates took a 1-0 lead in the first inning. Adam Frazier and Melky Cabrera each singled four pitches into the game and Frazier scored when Gregory Polanco grounded into a double play. The Pirates fell to 12-6 when scoring first.

Friday's outing was Ryu's third in five tries in which he did not walk a batter. He has given only two free passes in 27 1/3 innings this season.

Both of Ryu's walks this year were on borderline pitches, and he has not walked a batter at home since Aug. 26 of last season. In that stretch, he has struck out 58 batters over 56 innings.

Pinpoint control has always been a priority for the lefty. He's executing that plan well of late.

"I guess it all goes back to how I was taught going back to elementary school," Ryu said. "People around me told me how it's better to give up a homer than a base on balls. Unfortunately, that led to consecutive games of me giving up homers right now. That is the downside, but at least I don't have anybody that gets on base for free. It's just the nature of how I attack hitters."

Pirates: Outfielder Corey Dickerson, who has been out since April 4 because of a shoulder strain, is set to join Triple-A Indianapolis at Charlotte for a minor league rehab assignment.

Dodgers: Catcher Russell Martin, who has been out since April 10 with a back injury, participated in a simulated game at Dodger Stadium and is expected to be in the starting lineup Sunday, manager Dave Roberts said. . Right-hander Tony Cingrani, who hasn't pitched this season because of shoulder soreness, threw on the side and could be headed on a rehab assignment next week, according to Roberts.

Joe Musgrove (1-1, 1.59 ERA), who has left each of his last two starts with a lead in the seventh inning, will take the mound Saturday at Los Angeles. Clayton Kershaw (0-0, 2.77) will make his third start of the season Saturday, after delivering a quality start at Milwaukee on Sunday despite four walks.