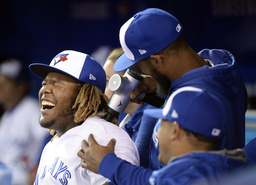 Toronto Blue Jays' Vladimir Guerrero Jr. (27) laughs as teammate Teoscar Hernandez (37) jokes around with a handheld massager during the sixth inning of a baseball game against the Minnesota Twins, Wednesday, May 8, 2019, in Toronto. (Nathan Denette/The Canadian Press via AP)

Polanco had five hits, including a two-run home run, Kyle Gibson struck out a career-high 11 and the Minnesota Twins beat Toronto 9-1 on Wednesday, completing a three-game sweep of the struggling Blue Jays.

"It's very rare to see anything like this," Twins manager Rocco Baldelli said. "I don't know if I've ever seen anything like it. A pretty special player and he's obviously giving us some special moments."

"He's been raking all year for us," C.J. Cron said. "It seems like he's going to get a hit every single time he steps to the plate."

Polanco raised his average to .344, tops in the AL. He had three hits before Toronto's ninth batter, Luke Maile, came to the plate for the first time.

Cron had a two-run homer among his four hits and Jonathan Schoop added a two-run shot as the Twins swept a series for the fifth time this season. Minnesota has won 10 of 13.

"We're in a really good groove right now where guys are really focused and have a really consistent approach," Gibson said.

Thanks to their recent surge, the Twins own the best record in the majors at 23-12.

"That's awesome, that's what we want," Polanco said. "That's why we're here and what we're competing for, to be in first place."

Eddie Rosario hit his AL-leading 13th home run, one of four long balls by the Twins. Minnesota had 18 hits, one shy of its season high.

Toronto has lost a season-high five straight and eight of nine overall. The Blue Jays were outscored 20-1 and outhit 38-11 in the three games against the Twins.

Gibson (3-1) allowed one run on two hits in six innings to win for the third time in four starts. He struck out the side in the first and the fourth and threw 88 pitches, 62 for strikes.

"When you get starts like that, the odds are on your side," Baldelli said.

After being blanked in consecutive games to start the series, the Blue Jays finally scored on a homer by Billy McKinney in the fifth, snapping a 24-inning drought. Toronto avoided being blanked in three straight games for the third time. It happened previously in May of 1981 and August of 1990.

McKinney's homer, his second, snapped a 25-inning scoreless streak by Minnesota pitchers, their longest since a 25-inning stretch in September of 2004.

Thornton allowed five runs and seven hits in two-plus innings, the shortest start of his brief career. He has allowed seven home runs in 37 1/3 innings.

Blue Jays: 3B Vladimir Guerrero Jr. got the day off. Toronto's top prospect has three hits in his past 23 at-bats.

Nelson Cruz went 0 for 6 and struck out three times. He was the only Twins starter not to get a hit.

The Twins hit eight home runs in the series, giving them 64 this season. They began the day tied with the Dodgers for the fourth-most in the majors, behind Seattle (71), Milwaukee (65) and Houston (61).

Twins: Minnesota is off Thursday. RHP Jake Odorizzi (4-2, 2.78 ERA) starts Friday as the Twins return home for a four-game series against Detroit. Odorizzi has won four straight starts and has not allowed a run in his past 13 innings. RHP Tyson Ross (1-4, 5.34) starts for the Tigers.

Blue Jays: After a day off, RHP Clay Buchholz (0-2, 6.57) starts Friday in the opener of a three-game series against the Chicago White Sox. Buchholz allowed a season-worst seven runs in his previous start, May 5 at Texas. RHP Dylan Covey (0-1, 4.50) starts for Chicago.