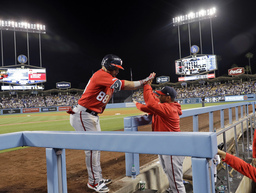 Two days after signing with Washington following his designation for assignment by San Francisco last week, Parra hit a grand slam in his second game with the Nationals as they rallied for a 5-2 victory over the Los Angeles Dodgers on Saturday night.

Parra's homer came in the eighth inning when he hit a fastball by Dylan Floro on the sixth pitch of the at-bat into the seats in right-center for his second home run of the season. It was his second career grand slam, and first since 2012.

"I'm very happy. It is a big moment for me," Parra said. "I just wanted to hit a pitch in the zone."

Parra has only 81 home runs in 11 seasons but hit his eighth against the Dodgers - his most against one team - and all but one have come in Los Angeles.

"To see Parra hit it over the wall that was just what we needed and gave us so much energy," Nationals starter Max Scherzer said.

The Nationals trailed 2-0 going into the eighth after Dodgers' starter Walker Buehler allowed only four hits. They loaded the bases with one out against Pedro Baez (2-2) and got their first run when Juan Soto drove in Wilmer Difo with a single after fouling off five straight pitches with a 1-2 count. It was Soto's first game back after he was activated off the injured list earlier in the day.

Scherzer (2-4) went seven innings and allowed two runs and five hits with seven strikeouts. His only mistake came in the third inning when he walked Max Muncy with two outs and then served up a fastball to Justin Turner, who homered to right-center. Sean Doolittle picked up his sixth save with a scoreless ninth.

"He's been pitching really well. For him to get a win was gratifying not only for him but for the club," Washington manager Dave Martinez said of Scherzer.

Buehler struck out seven in his first career start against the Nationals. It is the second consecutive game where he has gone seven innings.

Alex Verdugo had two hits for the Dodgers, who have dropped two of their last three at home after winning 10 straight.

"Can't say enough about what Walker did tonight. He was dominant tonight but unfortunately that eighth inning got away from us," Dodgers manager Dave Roberts said.

Soto missed 10 games due to back spasms, but was able to pick up where he left off. He has reached base in his last 16 games and still leads the team in runs batted in (23) along with being tied for the lead in home runs with six.

Nationals: P Trevor Rosenthal (viral infection) began a rehab assignment at Double A Harrisburg. The right-hander struck out one in a scoreless inning. Martinez said he wants Rosenthal to refine his mechanics and gain confidence after he struggled the first month of the season. Rosenthal was 0-1 with a 27.00 ERA in seven appearances where he allowed 12 runs in three innings.

Dodgers: P Caleb Ferguson (oblique strain) will make another rehab appearance on Tuesday either at Triple A Oklahoma City or Class A Rancho Cucamonga. The left-hander tossed a scoreless frame at Rancho Cucamonga on Friday.

Nationals: RHP Stephen Strasburg (3-2, 3.71 ERA) has struck out nine or more in four straight starts. He fanned 11 last Tuesday at Milwaukee but also allowed four runs in 6 2/3 innings to take the loss.

Dodgers: LHP Hyun-Jin Ryu (4-1, 2.03 ERA) has gone at least seven innings in his last three starts and threw a complete-game shutout against Atlanta on Tuesday. Ryu threw seven scoreless innings and struck out eight in his last start against Washington on April 21, 2018.