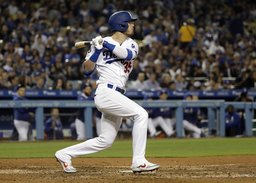 LOS ANGELES (AP) In a story May 15 about a game between the San Diego Padres and Los Angeles Dodgers, The Associated Press reported erroneously that Alex Verdugo drove in Corey Seager with a single in the fourth inning. Chris Taylor singled to drive in Seager.

A corrected version of the story is below:

Pederson and Bellinger hit two-run shots and Clayton Kershaw threw seven solid innings in Los Angeles' 6-3 victory over the San Diego Padres on Tuesday night in the opener of a two-game series.

Pederson and Bellinger homered in the third inning against starter Chris Paddack (3-2) and helped the Dodgers get their third win in four meetings against their NL West rivals. The duo has combined for 28 home runs, which is one behind Houston's George Springer and Alex Bregman for the most by teammates in the majors.

This was the fifth game where Pederson and Bellinger have both homered.

"They are both in a good place right now," Dodgers manager Dave Roberts said. "Joc has been rewarded in his approach with some home runs the past couple games. Cody has done a good job lately of not chasing the long ball and letting it happen."

Bellinger, who also drove in three runs, leads the majors with a .409 batting average and got his 19th multihit game this season. The home run was his first since April 28.

Kershaw (3-0) allowed three runs and five hits. The left-hander struck out five as he recorded his third victory in his last four starts. Kenley Jansen worked the ninth for his 13th save.

"Their two guys in the middle did damage but other than that it was all right," Kershaw said. "You're not always going to have your best stuff, but the beauty of being on such a great team is we are going to score runs."

Manny Machado had three hits - including a 441-foot, two-run shot in the fourth - in his first game back at Dodger Stadium since signing with San Diego during the offseason. Machado was acquired by the Dodgers from Baltimore on July 19 last season and was one of the key players in them getting to the World Series for the second straight year.

Franmil Reyes homered and had two hits for San Diego, which has dropped three of its last four. Paddack surrendered a season-high six runs, three earned, on five hits with three strikeouts.

"I could've done a better job with my fastball command early. My changeup wasn't my best tonight. I could have attacked it a little different," Paddack said.

The Padres scored two batters into the game when Reyes hit a solo shot off Kershaw to center, his second home run in seven at-bats against Kershaw.

Austin Barnes got on base to lead off the Los Angeles third when Machado's throw took Eric Hosmer off the bag. Two batters later, Pederson drove Paddack's fastball over the wall in center for LA's first hit and a 2-1 lead. The Dodgers added to their lead later in the inning when Bellinger hit a two-run homer for his 15th of the season.

Machado's shot drew the Padres within 4-3 before the Dodgers added a run each in the fourth and fifth innings. Corey Seager led off the fourth with a double and came home on Chris Taylor's single. Max Muncy made it a three-run lead an inning later when he scored on Bellinger's groundout.

Pederson's home run was the 100th of his career. He is the 28th player in Dodgers' history to accomplish that feat. Half of Pederson's 26 hits this season are homers.

"I hope there's more to my offense than power but it seems like everything else I hit is an out," said Pederson, who leads the majors in home runs against righties with 13.

Padres: RHP Trey Wingenter (shoulder strain) threw a side session Tuesday and could come off the inactive list the next day or two. Wingenter was eligible to come off the IL on Tuesday.

Dodgers: LHP Caleb Ferguson (oblique) is expected to be activated off the IL on Friday after he made a couple of rehab appearances last week.