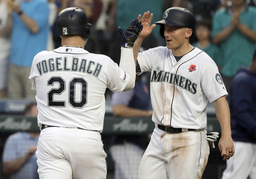 SEATTLE (AP) Daniel Vogelbach provided a preview of what was to come Monday when he launched a batting practice home run into the upper deck in right field at T-Mobile Park.

Batting practice is one thing. Doing it in a game is a rare accomplishment at the 20-year-old stadium.

"He did it in BP, third deck, and then followed it up in the game," Mariners teammate Mallex Smith said. "He's not a 5 o'clock hitter."

Vogelbach's mammoth two-run homer in the seventh inning was the highlight of a 6-2 win over the Texas Rangers that snapped Seattle's six-game losing streak.

Kyle Seager drove in his first run of the season and Smith stole four bases, including three in the eighth - capped by his second career steal of home. Seattle also got solid pitching from Tommy Milone as the Mariners rebounded after being swept by Texas and Oakland on the road.

But what everyone wanted to talk about was Vogelbach's towering homer off reliever Jose Leclerc that found a rare landing spot, one of the few home runs to reach that part of the stadium.

"It was just a curveball out over the plate and I was able to ride it out and keep it fair. I was just happy I could drive two runs in," he said.

According to team records through the 2015 season, only two homers had reached that level of the stadium and it was uncertain if any had in the past four seasons. It was Vogelbach's 15th homer of the season and while it was close to being a foul ball, the home run call stood following a replay review.

"For the ball to go over the top of the foul pole like that, that's some kind of special power," Seattle manager Scott Servais said.

Seager, activated off the 60-day injured list last weekend, blooped a single to score Smith in the third when Seattle scored a pair. Smith came through an inning later with a sharp single to score J.P. Crawford.

Milone (1-1) pitched into the sixth. Logan Forsythe missed a home run by inches and settled for an RBI double in the fourth, and Ronald Guzman homered on a 1-2 pitch in the fifth. Those were the only costly mistakes by Milone, who allowed four hits and struck out seven.

Rangers manager Chris Woodward said he thought an early start time and shadows on the field were a factor.

"I think more so for him (Milone) because he is an off-speed guy. He changes speeds, he moves the ball around. Our hitters had a tough time seeing that changeup," Woodward said.

"I gave up three runs and we lost, so it doesn't matter how many strikeouts," Lynn said.

Smith stole home in the eighth when Kyle Bird tried to pick off Mitch Haniger at first base. Smith stole second and third earlier in the inning and had a stolen base in the third. The four steals were a career high and matched a club record.

Seattle's last steal of home was by Dustin Ackley in 2012.

Rangers: Texas recalled Bird from Triple-A Nashville and designated RHP Jeanmar Gomez for assignment. Gomez had an 8.22 ERA in 16 relief appearances for the Rangers.

Mariners: Seattle claimed RHP Jimmy Cordero off waivers from Toronto and transferred RHP Gerson Bautista to the 60-day injured list to clear a spot on the 40-man roster. Cordero, 27, was designated for assignment by Toronto last week.

Servais had a long list of injury updates and most of them were positive. Second baseman Dee Gordon was diagnosed with a deep bone bruise in his right wrist and not a fracture after seeing a specialist in Florida. Servais said Gordon's return will likely be determined by how well the wrist can handle swinging and hitting. Gordon said he aggravated the wrist by returning too soon from the initial injury after being hit by a pitch earlier this month.

"I thought I was invincible. I am not," Gordon joked.

Mariners infielder Ryon Healy (lower back inflammation) should resume baseball activities in the next few days.

Seattle pitchers Hunter Strickland (lat) and Felix Hernandez (shoulder) could be throwing off a mound by the end of the week, or early next week. Both have been tossing from beyond 100 feet in recent days, Servais said. Strickland has been out since March 30, and Hernandez has been sidelined since May 12.

Rangers: RHP Adrian Sampson (2-3) was listed as the starter for Tuesday, although the Rangers plan to use Jesse Chavez (0-1) as an opener. Sampson has followed an opener in each of his past two outings.