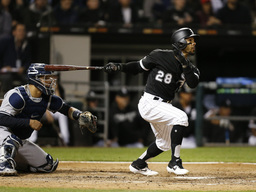 The biggest and best one belonged to Leury Garcia.

Garcia hit a tiebreaking solo homer off Adam Ottavino in the seventh inning, lifting Chicago to a 5-4 victory over the New York Yankees.

Garcia looked at two called strikes from Ottavino before battling back and sending the 11th pitch he saw over the wall in right-center for his fourth homer .

"I just tried to swing at good pitches," Garcia said through a translator. "I wasn't looking for a homer. I just wanted to try to get on base."

It was the first time Ottavino (2-2) allowed homers in consecutive appearances in almost two years. The right-hander, who signed a $27 million, three-year contract with New York in January, served up a solo shot to Cleveland's Jake Bauers in the seventh inning of Sunday's 7-6 victory over the Indians.

"I give a lot of credit to him for fighting me and getting into that spot," Ottavino said of Garcia's homer. "I didn't want to walk him, so I gave him a pretty good pitch to hit and he didn't miss it there."

Tim Anderson also connected during Chicago's fourth win in five games, and four relievers combined for 3 1/3 innings of three-hit ball. Batting in the top two slots in the lineup, Garcia and Anderson combined for four hits and five RBIs.

Evan Marshall (2-0) got three outs for the win, and Aaron Bummer worked the ninth for his first career save after regular closer Alex Colome threw a season-high 39 pitches in Tuesday's 7-5 victory over Washington. Marshall hasn't allowed an earned run in 16 appearances this year.

Brett Gardner homered for the Yankees, who have dropped seven of 10. Clint Frazier finished with three hits.

"We'll get it going," manager Aaron Boone said. "This is all part of it; it's not all smooth sailing all the time."

New York jumped out to a 4-0 lead behind Gardner, who drove a 3-1 pitch from Ivan Nova over the wall in right for a two-run drive in the fourth. Gardner also reached on a fielder's choice in the second, advanced on a wild pitch and scored on Frazier's single.

Gardner has six hits in his last four games after beginning June with a 1-for-23 slide. He also homered during the Yankees' doubleheader split against the Mets on Tuesday.

J.A. Happ appeared to be well on his way to his fourth straight win before running into trouble in the fifth. Garcia got Chicago on the board with an RBI double, and Anderson followed with a drive to center for a tying three-run shot .

Happ retired the next three batters after Anderson's 10th homer, but the damage was done. The left-hander yielded five hits and walked four in five innings.

"I found a way to get out of the fourth and should've learned a lesson to attack and get ahead," he said. "Went out there for the fifth and didn't get it done."

The Yankees placed Kendrys Morales on the 10-day injured list with a left calf strain. The first baseman/designated hitter is the 20th player to go on the IL this year for New York, matching its total for the entire 2018 season.

Yankees: OF-DH Giancarlo Stanton is taking his minor league rehab assignment to Triple-A Scranton/Wilkes-Barre for its weekend series at Durham. If Stanton gets through this weekend with no problems, Boone said the slugger could be activated before Tuesday's game against Tampa Bay. ... OF Aaron Judge (strained left oblique) could join Stanton with Scranton/Wilkes-Barre this weekend.

White Sox: INF Yoan Moncada was held out for the second straight game after leaving Monday's loss to Washington because of upper back tightness. He said he might be able to return this weekend. "I want to be sure that when I come back I am 100 percent healthy because I don't want to have any lingering issues going forward," Moncada said through a translator.

White Sox right-hander Lucas Giolito (9-1, 2.28 ERA) goes for his eighth straight win when he faces Yankees left-hander CC Sabathia (3-3, 3.96 ERA) on Friday night. Giolito is 8-0 with a 1.69 ERA in 10 starts since his only loss of the season April 6 against Seattle. Sabathia has dropped his last two starts, but is 19-7 with a 3.67 ERA versus Chicago for his career.