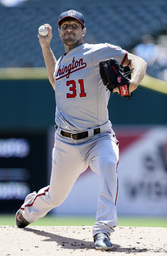 DETROIT (AP) With 100 pitches thrown and warming up for his final inning of work, Max Scherzer noticed Miguel Cabrera coming into the on-deck circle on Sunday.

He knew Cabrera would be pinch-hitting next and was excited for an eight-inning showdown between future Hall of Famers.

"I knew this was going to be on, so you get excited in that moment," Scherzer said. "That's full adrenaline right there."

Scherzer (8-5) struck out his former teammate on four pitches, one of 14 on the afternoon as he pitched in Comerica Park for the first time since leaving Detroit as a free agent after the 2014 season, lifting the Washington Nationals over the Tigers 2-1 on Sunday.

Scherzer stuck out double-digit batters for the fourth straight outing and allowed four hits. In his last eight games, he's 6-0 allowing only six earned runs with 83 strikeouts in 57 innings. He did not walk a batter Sunday, and 86 of his 115 pitches were strikes.

"It's kind business as usual, at this point," closer Sean Doolittle said of Scherzer, the three-time Cy Young winner. "I don't mean that as a cliche, but he's set the bar so high so high for himself."

The only run allowed by Scherzer, who struck out 20 batters the last time he faced the Tigers in 2016, was a Brandon Dixon home run in the seventh inning, his team-leading 11th.

But Anthony Rendon led off the eighth inning with the game-winner home run, his team-leading 19th and the second home run in as many days.

Rendon's blast came off Joe Jimenez (2-6), who allowed a home run and a walk to the only two batters he faced.

Detroit's Jordan Zimmermann, who also was starting against his former team, struck out four batters in six innings, allowing one run.

"(Zimmermann) threw the ball fantastic and Scherzer came as advertised," Tigers manager Ron Gardenhire said. "He was filthy. Good stuff, great fastball and all those things. We knew it was going to be a tough day trying to score runs."

Kurt Suzuki scored Rendon with an RBI single in the fourth inning. That play was set up by Matt Adams reaching safely on a potential double-play ball that could have ended the inning.

Rendon had reached on a double to start the inning, and Zimmermann said the slider he threw is the one pitch he'd like to have back.

"I tried to come front door with it," Zimmermann said. "It was a really dumb pitch on my part."

Sean Doolittle earned his 18th save, allowing one hit and a walk in the ninth inning, getting Niko Goodrum to pop out with two runners on to end the game. It was career save No. 100 for the 32-year-old.

After Scherzer told the team about the milestone, the Nationals mobbed Doolittle with a shaving cream pie to the face during a post-game dance party celebration in the locker room.

"It's not a milestone that's necessarily going to put me on the top of any leaderboard or anything, but it still means a lot to me," Doolittle said. "To come through for my team now 100 times over the course of my career? I don't know, that's pretty cool. I'm excited about it."

Tigers: Infielder Jordy Mercer may re-join the team this week in Chicago. He's been on the injured list since May 9 with a right quad strain and has been rehabbing in Triple-A Toledo since June 22.

The Tigers have won just three of their last 25 games at home.

Sunday was the 15th straight game a Washington player homered, a team record.

Scherzer passed Hall of Famer Tom Glavine and then Chuck Finley on the all-time strikeout list. His 2,619 strikeouts rank 25th all-time and third on the active list behind CC Sabathia and Justin Verlander.

"His stuff moves really late," Dixon said. "You think it's in one spot and then you swing and you look at the video and it's like, `Dang, that moved a lot more than I thought.'

"And every pitch looks very similar. When you have three pitches you're throwing for strikes and they all look alike, it's going to keep you off balance."