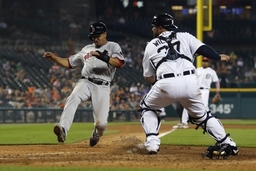 DETROIT (AP) It has taken the Boston Red Sox a long time to win the first two games of their weekend series with the Detroit Tigers.

They'd love to finish off a sweep quickly.

"We've got one more game until the All-Star break," Red Sox manager Alex Cora said. "Let's come in here, take care of business and finish on a high note."

The Red Sox beat the Tigers 10-6 on Saturday, in a game similar to the series opener.

In the first game, Boston led 6-1 and allowed the Tigers to get within a run before pulling away late.

On Saturday, the Red Sox led 7-0, the Tigers cut it to 7-6 and Boston scored the game's final three runs.

"We jumped out early again, but they retaliated," Boston's Mookie Betts said. "Give them some credit, but we kept putting on the pressure and scoring runs."

There was one more similarity - both games ended after midnight because of lengthy rain delays.

Betts and Andrew Benintendi each finished a homer short of the cycle. Benintendi went 4 for 6 with two singles, a double and a triple. Betts was 3 for 5 with a single, double, triple and walk.

Jeimer Candelario homered twice for the Tigers, who lost for the 24th time in 27 home games. Candelario went to Triple-A with a .179 batting average in early June, but is hitting .378 with four homers in 10 games since his return.

The start of the game was delayed more than four hours by heavy rains that flooded parts of metro Detroit, and both starters had poor outings.

"I got ready to go out to warm up, and they told us there was going to be a delay," Tigers starter Jordan Zimmermann said. "Then after about an hour, they said it was clearing, so I got heated up again, and then more cells popped up. It's tough to get ready three times."

Rick Porcello (6-7) struggled on the way to the win, but remained undefeated against his former team in five starts. He gave up six runs on nine hits in 5 2/3 innings.

"Everything was fine through five innings and then I got hit around in the sixth," he said. "I've got to be better."

"It would be hard to give up 13 hits in three innings if you were trying to do it," he said.

Betts got halfway to the cycle in the second, hitting a two-run double that gave Boston a 4-0 lead. Christian Vazquez followed with a two-out single, giving Betts his fifth run in the first 11 innings of the series.

Candelario hit a two-run homer in the bottom of the fourth and Harold Castro followed with a triple, but Porcello retired the next three batters to end the inning with a 7-2 lead.

Candelario's second homer, a solo shot, started a four-run sixth. Bobby Wilson's two-out, two-run single pulled the Tigers within 7-5 and knocked Porcello out of the game.

Victor Reyes made it 7-6 with a triple. But, a throwing error by reliever Buck Farmer in the seventh allowed the Red Sox to move ahead by two runs.

The Tigers loaded the bases with one out against Josh Taylor in the bottom of the seventh, but didn't score.

Eduardo Nunez made it 9-6 with an RBI single in the eighth and Vazquez added a sacrifice fly in the ninth.

"We're trying not to kill the guys in our bullpen, but we're asking them to pitch two out of every three days and this is what happens," Gardenhire said.

Red Sox: RHP Nathan Eovaldi (elbow) threw a bullpen session before the game and came out without pain. Eovaldi is expected to throw another bullpen during the All-Star break, with a possible rehab stint after that.

Tigers: C Greyson Greiner (back) has gone 0-7 in three rehab games with Class A Lakeland.

Because of the four-hour delay, the Tigers announced in the third inning that any fan with a ticket to the game would receive a voucher good for a free ticket to a game later this season.

Zimmermann became the first Tigers starter to allow 13 or more hits in fewer than four innings since Ralph Comstock in an 18-5 loss to the Red Sox on Sept. 12, 1913.

Zimmermann became the first Tigers starter to allow 13 or more hits in fewer than four innings since Ralph Comstock in an 18-5 loss to the Red Sox on Sept. 12, 1913.

The teams finish the three-game series - their last game before the All-Star break - on Sunday. Former Tiger David Price (6-2, 3.33) will start for Boston, while the Tigers will throw an old-fashioned bullpen game. Gregory Soto (0-2, 8.06), who pitched in relief on Friday, is expected to be Detroit's opener.