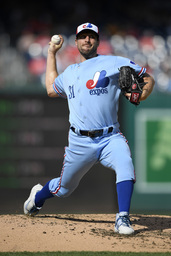 WASHINGTON (AP) A few days after the birth of his second daughter, Kacy, Max Scherzer was back to work.

His wife wouldn't have it any other way.

Scherzer sustained a dominant stretch with seven strong innings two days after the birth of his daughter, Kurt Suzuki homered and the Washington Nationals beat the Kansas City Royals 6-0 on Saturday.

The NL pitcher of the month for June, Scherzer (9-5) allowed four hits and struck out 11 with one walk in his final outing before heading to Tuesday's All-Star Game, where he won't pitch. Kacy was born Thursday.

"I know my wife, Erica, she wanted me to pitch today," Scherzer said. "She wants me out there pitching, she doesn't want me sitting at home. We got the in-laws in, we got help. She's a baseball wife, she (was) a pitcher (in college). She knows she wants me out there competing."

Scherzer has won seven straight starts and has an 0.84 ERA over his last nine appearances. On Saturday, he settled in after a 22-pitch first inning and later struck out the side in the seventh inning as Washington won for the ninth time in 11 games.

"I played in Atlanta (with Greg Maddux and Tom Glavine) and those guys they had were pretty good, but what I've seen out of Max is incredible, it really is," manager Dave Martinez said. "I don't know how many games now where he keeps getting better and better as we go along."

Both teams wore throwback uniforms in celebration of their franchise's 50 years since joining Major League Baseball in 1969, with the Nationals wearing the powder blue uniforms of the Montreal Expos.

"The way it looked early, they were going to bash his brains in, and he did a nice job of settling down and making pitches," Royals manager Ned Yost said. "I was pleased that he was able to give us six strong."

Alex Gordon had two hits and a walk for the Royals, who have lost eight of 10.

With Washington leading 1-0, Matt Adams walked leading off the second and Suzuki followed with his 11th homer of the season to culminate a 10-pitch at-bat.

Hall of Famer and former Expo Vladimir Guerrero threw out the ceremonial first pitch. ... It wasn't the first time in an Expos uniform for Martinez, who caught Guerrero's pitch, and third base coach Bobby Henley. Martinez hit .279 over 3 1/2 seasons with Montreal, and Henley was a teammate of Guerrero's on the 1998 Expos. ... Expos highlights were shown between innings.

Scherzer stole his first base of the season and second of his career after a single in the fourth. He was then caught too far off second on Trea Turner's grounder to third for a fielder's choice.

Kansas City CF Whit Merrifield recorded his 100th career steal when he swiped second in the first inning. He's the sixth fastest player in Royals history to reach that mark, doing it in 474 games. Tom Goodwin was the fastest (243 games).

Royals: Manager Ned Yost said he was without a quartet of relievers following Friday's 11-inning game including Wily Peralta (who pitched in four out of past five games), Jake Newberry (three out of four), Kevin McCarthy (51 pitches in the past three days) and Ian Kennedy (49 pitches in two days).

Nationals: Martinez said 1B Ryan Zimmerman was "normally sore" coming out of Friday's game and was given the day off. ... Martinez said Scherzer will get some extra time off after the All-Star break and won't make his next start until Sunday, July 14.

Royals: RHP Jakob Junis (4-8, 5.53) is winless since May 30. He received one run of support or less in four of his past six outings. He's never faced the Nationals.