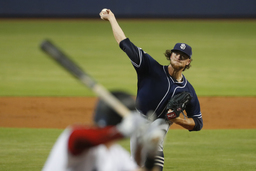 MIAMI (AP) Chris Paddack said he took the mound with a chip on his shoulder and a tragedy on his mind, and the emotions of the occasion brought out the best in the San Diego Padres rookie.

Paddack took a no-hitter into the eighth inning, and two relievers got the final four outs to complete a three-hitter and beat the Miami Marlins 3-2 Wednesday night.

The performance came in Paddack's first appearance against the Marlins, who made the right-hander an eighth-round draft choice in 2015 and traded him to San Diego for reliever Fernando Rodney the following year.

Along with an eagerness to show the trade was a mistake, Paddack said he pitched mindful of the late Jose Fernandez. As a Miami minor leaguer, Paddack admired the Marlins ace, who died in a 2016 boat crash.

"I could talk about this for an hour," Paddack said. "There's just so much."

After Starlin Castro homered leading off the eighth, Paddack (6-4) retired the next two batters and then departed, matching the longest outing of his career. He struck out eight, walked one, threw 94 pitches and lowered his ERA to 2.70.

The Padres, who played their first game in 1969, remain the only major league team never to have thrown a no-hitter.

"That shows you how hard it is," Paddack said.

Paddack drew Fernandez's No. 16 in the dirt and then went to work, retiring the first 15 batters before Cesar Puello reached on a throwing error by shortstop Fernando Tatis Jr.

Pinch hitter Yadiel Rivera, who walked with two out in the sixth, was the only other baserunner against Paddack.

Padres manager Andy Green said he began to think in the early innings that Paddack might throw a no-hitter.

"He looked really sharp from the get-go," Green said. "Nobody ever seemed on balance against him."

Facing the lowest-scoring team in the majors, Paddack needed only eight pitches in the first inning and struck out four of the first five batters. Garrett Cooper was so badly fooled by a pitch he whiffed and sent his bat flying into the eighth row, where it landed on an empty seat.

"Everything was working," Paddack said.

The Padres scored three times in the fourth after Richards retired the first two batters. Greg Garcia hit an RBI single, and Hedges' homer bounced off the top of the bullpen fence.

Kirby Yates pitched around back-to-back throwing errors to start the ninth for his 31st save. Castro's two-out RBI single made it 3-2 before Yates struck out Curtis Granderson with two on for the win.

"Kirby was outstanding," Green said. "That was a lot to pitch through in the ninth inning, some fairly high drama, and he's like he always is - low heartbeat, big-time executor."

The Marlins nearly broke up the no-hitter with two out in the sixth, when Miguel Rojas hit a line drive that popped out of first baseman Eric Hosmer's glove. Hosmer scrambled after the ball and tagged Rojas as he slid headfirst into the base.

Umpire Paul Nauert called Rojas out, and the call stood after a 2 1/2-minute review.

"I don't we had a good enough camera to tell if he was safe or out," Mattingly said.

The game's final pitch to Granderson was a called strike on a 3-2 count , but Mattingly said the splitter was high. Mattingly wants computers to determine balls and strikes.

"It almost has to happen. Hopefully the technology gets there quick," he said. "There's way too many misses. That's the second game I know of in the last week that ended on us on a ball four."

Before the game, the Padres optioned LHP Robbie Erlin to Triple-A El Paso and reinstated LHP Eric Lauer from the bereavement leave list.

Marlins: LHP Caleb Smith (5-4, 3.46), who is scheduled to start the rubber game of the series Thursday afternoon, is 2-1 with a 1.56 ERA in three career outings against San Diego.