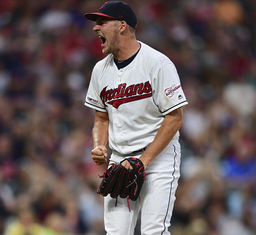 CLEVELAND (AP) Trevor Bauer tipped his cap after receiving a standing ovation when he walked to the dugout after being removed in the seventh inning. It might have been the right-hander's final appearance at home with the Cleveland Indians.

Bauer struck out 10 in 6 2/3 innings, Jose Ramirez hit a go-ahead home run in the sixth and the Indians beat the Detroit Tigers for the 11th straight time, 6-3.

Bauer (9-7) has been the subject of trade rumors as the July 31 deadline approaches. Several scouts were seated behind home plate to watch Bauer, who could be one of the big names dealt by end of the month.

Asked if the possibility of being traded is on his mind, Bauer said, "Nope. Don't think about it."

Bauer has two scheduled starts before the deadline, but both will be on the road.

Indians manager Terry Francona said president of baseball operations Chris Antonetti spoke with Bauer and other players who have been mentioned in trade rumors.

"He's fine," Francona said. "He likes to pitch. I hope he likes to pitch here. I think he does. We know how good he is. The one thing you know is on the day he pitches you're going to get a guy who goes out there and is not going to back down and is going to compete."

Bauer is unhappy that he's allowed five homers in his last two starts, including a solo shot by Niko Goodrum in the second and a two-run shot by Harold Castro in the third. He gave up three homers against Minnesota last Friday.

Cleveland swept the four-game series and moved to 12-1 against Detroit this season. The Indians have won five straight and 11 of 13 overall.

Brad Hand recorded the final four outs - all on strikeouts - for his 26th save in 27 chances.

Tigers starter Matthew Boyd (6-8), another trade candidate, gave up the home run to Ramirez that broke a 3-all tie. Jordan Luplow hit a two-run homer in the first.

Boyd allowed five runs in six innings. The left-hander has one win in his last eight starts for Detroit, which has lost nine of 10.

"We got after it pretty good against a good pitcher out there," Detroit manager Ron Gardenhire said. "We kind of hung in there and got close a little bit and Matty let up a couple big home run balls."

Tigers: Goodrum was 3 for 4 after missing Wednesday's game because of a bruised right pinky.

Detroit put two runners on in the eighth when Nicholas Castellanos hit a ground ball to the right side. Umpire Tony Randazzo ruled Brandon Dixon avoided the tag of second baseman Jason Kipnis, who threw to first to retire Castellanos.

The Indians challenged the call, which was ruled a double play after review. Gardenhire didn't get an explanation.

"They reviewed it and they overtuned it," he said. "I don't know how, but they did it."

Asked if the home runs he's given up recently are a result of bad luck or the way the game is today, Bauer said, "Ask our commissioner."

Indians: RHP Shane Bieber (8-3, 3.49 ERA) took a three-hit shutout into the seventh inning Sunday against the Twins before allowing three runs. The All-Star Game MVP will make his 20th start of the season.