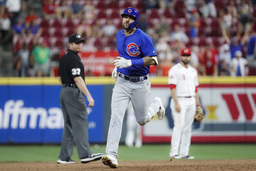 CINCINNATI (AP) Anthony Rizzo's 30th birthday celebration had a little bit of something for everyone to enjoy.

Rizzo had a pair of hits on his big day, Nicholas Castellanos added to his Chicago surge with a pair of homers and the Cubs beat the Cincinnati Reds 12-5 on Thursday night for their biggest NL Central lead of the season.

The Cubs' sixth win in seven games gave them a 3 1/2-game margin over the idle Brewers and a sense that things are heading in the right direction.

"That's the way we're supposed to look - the energy before the game, the dugout was alive," manager Joe Maddon said. "There were a few more smiles and a refreshing kind of attitude. That's what you have to be."

They all got in on the fun. Javier Baez unveiled his left-handed swing in the ninth as Kyle Farmer mopped up for the Reds. The Cubs finished with a season-high 19 hits and their first back-to-back games with at least 10 runs since April.

"With the guys we have off the bench now, it's a deep lineup and that's what it takes to go far," starter Cole Hamels said.

Rizzo was greeted in the visiting clubhouse by a banner featuring pictures of him as a youth. A few Cubs fans sang "Happy Birthday" before his first at-bat, and he answered with an RBI double off left-hander Alex Wood.

Castellanos had a pair of solo homers among his three hits, the latter breaking a 5-5 tie off Kevin Gausman (3-8) in the fourth inning. He's hit safely in all eight games since the Cubs got him from Detroit.

Ian Happ drove in four runs with a single and a two-run homer, his second straight games with four RBIs.

Hamels returned to the mound where he strained his left oblique on June 28. In his second start off the injury list, a rusty Hamels let an early four-run lead slip away as Aristides Aquino - Yasiel Puig's replacement - had an RBI double and two-run homer .

Aquino's homer was measured at 118.3 mph, tying the Yankees' Gary Sanchez and Mets' Pete Alonso for the hardest-hit homers this season. The International League All-Star was called up to play right field after Puig was traded to Cleveland and has gone 9 for 15 with three homers in his last five games.

Tyler Chatwood (5-1) fanned six in three innings as the Cubs pulled away.

The Cubs signed catcher Jonathan Lucroy on Thursday to help them get through the loss of All-Star Willson Contreras, sidelined by a strained hamstring. Lucroy had three hits and was called for catcher's interference twice.

The Reds fell to eight games out, one shy of their biggest deficit.

Manager David Bell returned from a six-game suspension for going after Pirates manager Clint Hurdle during a benches-clearing brawl last week at Great American Ball Park. Reliever Jared Hughes began a three-game suspension Thursday, imposed for purposely hitting Starling Marte with a pitch. Eight Reds and Pirates were suspended in all, including Hurdle.

Baez takes some left-handed swings during batting practice. Maddon encouraged him to use it in a game if the situation was right. With Farmer - an infielder and catcher - lobbing the ball in the ninth inning, Baez took him up on it and flied out.

"It wasn't to make a farce of the game," Maddon said. "This guy legitimately could do that."

Farmer threw so slowly that his pitches didn't register on the stadium's radar gun.

"I haven't pitched since my senior year in high school," Farmer said. "It was a cool experience. It was fun. I was trying to not hurt myself. I was just trying to throw a slow as possible."

Tennis player Monica Puig served a ceremonial pregame "pitch" to boyfriend and Reds infielder Derek Dietrich, smacking a ball from the mound with her racquet. The Western & Southern Open in nearby Mason opens this weekend.

Happ, a former University of Cincinnati star, is a .404 career hitter at Great American with six homers in 14 games.

Cubs: Catcher Taylor Davis was optioned to Triple-A Iowa to open a roster spot for Lucroy.

Reds: Catcher Curt Casali will start a rehab assignment with Triple-A Louisville on Friday. He's been on the injured list since July 18 with a sprained right knee.

Reds: Trevor Bauer (9-8) makes his first start for the Reds at Great American Ball Park. Cincinnati got him from Cleveland in the three-team deal that included Puig. Bauer lasted only 4 2/3 innings of a 5-4 loss at Atlanta on Saturday.