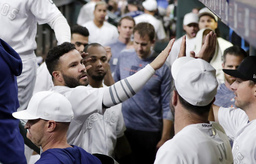 HOUSTON (AP) The Astros finally began to barrel up baseballs in the eighth inning, and it seemed like they might never stop.

Alex Bregman, Abraham Toro and Josh Reddick also drove in runs in the eighth as the Astros sent 11 batters to the plate.

"We did a good job of doing everything right," Astros manager AJ Hinch said. "We took advantage of a few mistakes, we hit the ball in a couple of good spots to capitalize on a couple of hits, a couple of big swings. Just everybody kind of dialed in and we had an explosive inning and separated ourselves and had a comfortable win."

Houston has won seven of eight. The club entered the day tied with the Yankees for the best record in the AL at 84-47.

"Play our game, we can't really get stuck scoreboard watching," Reddick said. "Happens every year, team's get so caught up in looking at the out of town scoreboard. That's all fine and dandy once we've gotten our wins. When that happens, we can watch all we want to."

Michael Brantley led off the eighth with a single, extending his hitting streak to 18 games. Reddick's two-run double gave him three RBIs. It was Reddick's first RBIs since Aug. 10 and first multihit game since July 14.

"It was good to get in there and contribute today and it actually mean something," Reddick said. "A lot of my at-bats haven't meant anything lately because we're usually up 3-0 by the time I get up. That's a good problem to have."

Valdez was called up from Triple-A Round Rock and earned his first win since June 15, ending a streak of four-straight losses.

Valdez (4-6) gave up one run, two hits and five walks but struck out eight, which tied a season high. He ran into trouble in the third, loading the bases with no outs. Back-to-back strikeouts and then a groundout by Albert Pujols kept the Angels off the board.

Martin Maldonado hit a two-run homer in the seventh to extend the lead to 4-1.

Jaime Barria (4-7) only gave up two runs but still was stuck with his fourth-straight loss. Barria allowed three hits, struck out four and walked three in 5 1/3 innings.

"I know I have to bring my A-game especially with a lineup like that," Barria said through a translator.

"Obviously, we didn't have a very good offensive game," Angels manager Brad Ausmus said. "We had really the one missed opportunity with the bases loaded and nobody out."

Astros: SS Carlos Correa (lower back stiffness) did agility work and light running but is still not hitting or throwing. The Astros hope to increase his activity over the coming days including being able to do batting practice and fielding ground balls. ... Aledmys Diaz (foot) was set to continue his rehab assignment with Triple-A Round Rock on Sunday, splitting time between shortstop and third base. Hinch said he could be reactivated by Tuesday.

Angels: LHP Andrew Heaney (3-3, 4.31 ERA) will start the series opener against the Rangers on Tuesday after a day off. Heaney is looking to build off his last start, where he struck out a career-high 14 in eight innings, which came against the Rangers.

Astros: RHP Justin Verlander (15-5, 2.77 ERA) will start the series opener against the Rays on Tuesday after a day off. Verlander is coming off a complete-game loss to the Tigers where he struck out 11 and walked none. Former Astros RHP Charlie Morton (13-5, 2.85) is slated to pitch for Tampa Bay.