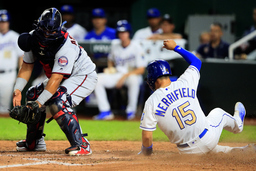 The Twins became the record fourth team in the major leagues to win 100 games this season, beating the Kansas City Royals 6-2 Friday night behind two-run homers from Miguel Sano and Ryan LaMarre in a game shortened to 6 1/2 innings because of rain.

Minnesota, which plays the New York Yankees in the Division Series starting next Friday, reached the century mark in wins for just the second time in franchise history. The 1965 Twins went 102-60, then lost the World Series to the Los Angeles Dodgers in seven games.

"It was really cool," said Rocco Baldelli, the Twins' first-year manager. "We just had a moment as a group here in the clubhouse - it was really nice in a season full of really cool, exciting times and accomplishments."

This is the second season with three 100-win teams in one league after the AL last year, and the first with all three division winners in one league reaching the century mark.

At 58-102, the Royals are among a record-tying four teams with 100 losses, joining Detroit, Baltimore and Miami. Kansas City has reached triple figures in losses for the sixth time. The only previous season with four 100-loss clubs was 2002.

Nelson Cruz and Eddie Rosario hit RBI singles in the first off Eric Skoglund (0-3), and Sano boosted the lead to 4-0 in the second with his 34th homer. LaMarre's second home run of the season made it 6-1 in the third.

Baldelli set a franchise record for a rookie manager, surpassing Joe Cronin's 99 for the 1933 the Washington Senators.

"For us, it's unbelievable, that's great," Sano said. "Great team, good people, good coaches. It's a big moment for Rocco - his first time out winning 100 games."

Minnesota's 303 home runs are second in the major leagues behind the Yankees' 305. The Twins didn't seem concerned about falling behind.

"That's not something that's going to be overly upsetting to anyone," Baldelli said.

Jose Berrios (14-8) struck out nine, allowing two runs and six hits in his first complete game this season, the third of his big league career. By finishing six innings, he reached 200 1/3 for the season.

"Every great athlete prepares himself to do great things and that was one of my goals this year. Every good pitcher wants to throw at least 200 innings in a season," Berrios said.

With rain moving into the area, the Twins turned aggressive, intent on getting at least five innings in after taking the lead. Royals reliever Kevin McCarthy needed just four pitches to retire them in the fifth.

"We knew we were racing against the rain," Baldelli said. "We knew it was going to get pretty ugly out there quick."

Umpires called the game after a 40-minute delay.

Ned Yost's No. 3 was chalked behind home plate. The retiring manager was honored before the game, leading wife Deborah and family members through two lines of Royals players and staff. He received framed mementoes, a 4-wheeler to ride on his Georgia farm and a standing ovation from the fans.

"It's emotional a little bit," Yost said before the ceremony "I've spent 10 great years here, but I'm anxious to get, on too. So there's a lot of good and a little bit of sad. But more good than sad."

Yost plans to spend more time with his family and he was asked if he planned to take his grandchildren to a theme park.

"I went to Disney World with my grandkids last year," he said, "and my feet haven't been the same since."

Saturday's game was moved up five hours to 1:15 p.m. CDT because heavy rains are forecast. The Twins likely will use several pitchers, starting with Cody Stashak (0-1, 3.13 ERA). The Royals will start RHP Glenn Sparkman (4-11, 6.11 ERA).