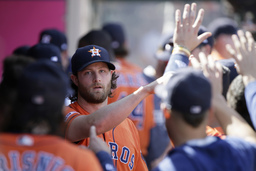 By BY JILL PAINTER LOPEZ

Cole earned his career-high 20th win, added to his major league-leading strikeout total and finished with the best ERA in the AL, wrapping up a dominant season for himself and the Houston Astros with an 8-5 victory over the Los Angeles Angels on Sunday.

"It was a consummate team effort," Cole said. "The offense was impeccable. Defense was great. Then the bullpen picked me up. It wasn't a situation where we could really stretch the pitch count so I needed my teammates to pick me up and they did."

Cole (20-5) posted his franchise-record 16th straight win as the Astros wound up with the top record in the majors at 107-55 and home-field advantage throughout the postseason. They begin the playoffs Friday at home against the winner of the wild-card game between Tampa Bay and Oakland.

"I never really envisioned the numbers or anything," Cole said. "I envisioned getting better, and I did."

In his last outing before the postseason, Cole allowed one earned run over five innings and struck out 10, lowering his ERA to 2.50. He fanned 326 in 213 1/3 innings, the most strikeouts in a season since Randy Johnson had 334 in 2002 for Arizona.

"It's a tough day to pitch for a couple of reasons, last day of the year and we are all looking forward to what's next," Astros manager AJ Hinch said. "It was very important to him personally and the entire team was pulling for him. I put the starting guys in there for at least half of the game. We wanted to get him the lead, we wanted the 20th win for him."

Cole is the first pitcher in the majors to record double-digit strikeouts in nine consecutive games. He also became the first to reach 300 without throwing a complete game.

When Cole struck out Kaleb Cowart for the final out of the fifth inning, he punched the inside of his glove and got high-fives from all of his teammates in the dugout.

The 29-year-old righty nearly won the AL pitching Triple Crown - he finished second in wins to teammate Justin Verlander, who won 21. Verlander was second to Cole in the AL in strikeouts (300) and ERA (2.58).

The Astros notched another strikeout record as a team - they're the first to lead the majors in pitching strikeouts (1,671) and also have the fewest strikeouts at the plate (1,166).

"It was an awesome season for us," shortstop Alex Bregman said. "Franchise record in wins. We had just a great season as a team and a lot of guys really performed well."

Bregman was 1 for 1 with two walks. Springer had a four-hit day with 3 RBIs and two runs.

The Angels finished at 72-90, their fourth consecutive losing season. The Angels struggled through injuries to Mike Trout and others, and the death of teammate Tyler Skaggs.

"There were some positives but most of positives were on individual levels," Angels manager Brad Ausmus said. "Quite frankly, at this point, I'm ready to put it behind me. It was kind of a tough year."

Rookie Matt Thaiss homered twice, doubled and drove in four runs for the Angels. He homered off Cole in the third inning, a first-pitch solo shot to center field. He hit a two-run homer off Brad Peacock in the sixth for his second career multihomer game. He added an RBI double in the eighth.

PUJOLS BY THE NUMBERS

Mark Langston returned to Angel Stadium on Sunday after he suffered a cardiac arrest in the radio booth in Houston last week. He came back to Anaheim on Saturday and didn't work the game.

"I'm not going to lie. Life is different, I have to admit. When I see my grandson ... it's definitely different," said Langston, who paused as he teared up. "I have to look at it that way. There was a reason I was given extra time. I don't know what it is. There's a reason for it. I haven't even been emotional. That's weird."

Langston's 6-year-old grandson, Ever, and family members and friends were with him Sunday.