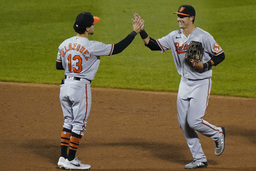 The Orioles won their fourth straight and improved to 20-21, moving within a half-game of the slumping Yankees for the second wild-card spot.

D.J. Stewart also homered for the third straight game after hitting three homers in Baltimore's weekend series over the Yankees. Cedric Mullins had an RBI triple as the Orioles won for the sixth time in eight games.

Pat Valaika hit a solo homer and had an RBI infield single that the Mets challenged and could not get overturned in the fifth. Valaika's hit occurred just before Ruiz lined a 3-1 sinker from Robert Gsellman into the right field seats to turn the game into a rout.

Jose Iglesias capped the scoring with an RBI single in the eighth.

Baltimore tied season highs for homers and runs and scored double-digit runs for the third time this season.

Jake Marisnick and Jeff McNeil homered for the Mets, who lost for the eighth time in 12 games.

Baltimore left-hander John Means (1-3) rebounded nicely from one of his worst starts of the season, allowing one run on three hits in a season-high six innings. Means struck out five, walked one and threw a season-high 97 pitches.

Michael Wacha (1-3) allowed five runs (four earned) on seven hits in four innings. He has allowed 11 runs in three starts since returning from a three-week injured list stint due to right shoulder inflammation.

The Orioles took a 2-0 lead on Stewart's drive into the second deck in right field in the second inning and went up 4-1 an inning later when Mountcastle hit his fourth homer since being called up.

Valaika opened the fourth by reaching on Marisnick's fielding error in center. After Marisnick's misplay, the Orioles went up 5-1 on Mullins' third career triple.

Orioles: 1B Chris Davis (left knee tendinitis) was activated off the injured list. . RHP Carson Fulmer was activated after throwing a 35-pitch bullpen session Monday and will be used as a reliever. . IF Dilson Herrera was designated for assignment and RHP Brandon Kline was sent to the alternate site.

Mets: LHP Steven Matz (left shoulder bursitis) struck out five in two innings during a simulated game at the alternate site in Brooklyn on Tuesday. Gsellman exited with an undisclosed injury after throwing a pitch to Renato Nunez in the eighth.

Orioles: RHP Jorge Lopez (1-0, 5.59 ERA) makes his third start for Baltimore. He allowed three unearned runs in five innings in a 6-3 win over the Yankees on Friday.

Mets: RHP Rick Porcello (1-4, 5.54 ERA) allowed two runs in six innings in a no-decision to Philadelphia on Friday. He is winless in his last five starts, his longest stretch since going winless in six consecutive starts in 2015 for Boston.