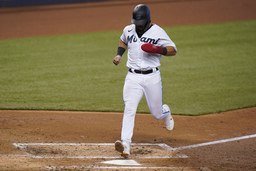 Rookie Sixto Sanchez pitched a three-hitter over seven innings for his first complete game in five major league starts, leading the Miami Marlins over Philadelphia 2-1 Sunday in a doubleheader opener to close on the second-place Phillies in the NL East.

Facing the organization that traded him before the 2019 season, Sanchez (3-1) struck out four, walked three and hit a batter. He became the second Marlins pitcher to go the distance by his fifth game. The Marlins acquired Sanchez and catcher Jorge Alfaro for catcher J.T. Realmuto, who did not play after getting banged up Saturday.

"It motivated me a lot that I was facing the Phillies," Sanchez said in Spanish. "I held my head high, knowing I could beat the Phillies."

Miami (22-20), in line for a playoff berth as a wild card, moved within a half-game of the Phillies (23-21). Zach Eflin (2-1) was to start the second game for Philadelphia, the next-to-last game of the major leagues' first seven-game, regular-season series since 1967.

"I went after him and was able to locate the pitches correctly and get him," Sanchez said of Harper.

Rookie Ramon Rosso (0-1) made his first big league start after five relief appearances and allowed two runs, two hits and three walks in 2 1/3 innings. Rosso was added to the Phillies' active roster as the 29th man.

Andrew Knapp hit a sacrifice fly in the second, but the Marlins went ahead on RBI singles by Corey Dickerson and Starling Marte. Connor Brogdon relieved Rosso with the bases loaded and struck out Garrett Cooper and Isan Diaz. Brogdon recalled from the alternate training site Sunday, retired all seven batters he faced, striking out four.

Realmuto felt hip discomfort running out a ground ball Saturday. First baseman Rhys Hoskins did not plat after favoring his left arm following a collision with Dickerson', who was attempting to beat out a grounder.

Miami shortstop Miguel Rojas did not play after jamming his right middle finger when he tripped while running to his position before Saturday's game.

Marlins: INF Eddy Alvarez, a 2014 Olympic silver medalist in speed skating who earned a promotion to the major league roster in the wake of the club's coronavirus outbreak the first week of the season, was designated for assignment .. LHP Dan Castano was optioned to the alternate training site, and Miami selected the contract of LHP Braxton Garrett.