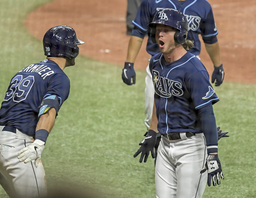 ST. PETERSBURG, Fla. (AP) Brett Phillips hit a two-run homer in the sixth inning Tuesday night and the Tampa Bay Rays held on for a 4-3 win over Oakland, handing the Athletics their second loss in 16 games.

Joey Wendle's two-out single in the seventh tacked on another run for the Rays and ended Tampa Bay's 0-for-26 stretch with runners in scoring position.

Phillips' first homer of the season came off Frankie Montas (2-2) and erased the impact of a bizarre defensive decision in the top of the sixth by Rays center fielder Kevin Kiermaier.

"Hits like that kind of reassure you to keep doing your work," said Phillips, who had been struggling along with the rest of Tampa Bay's offense. "It feels good to contribute. I got lucky and put a good swing on it."

"We needed something to spark us and that certainly did," manager Kevin Cash said.

Jeffrey Springs (1-0) got the win in relief. Diego Castillo worked the ninth and gave up Sean Murphy's third homer this season before earning his fifth save.

It was the first one-run loss of the year for Oakland. The A's have won five games by one, including Monday night over the Rays after their 13-game winning streak ended Sunday at Baltimore.

With one out, Matt Olson on third base in the sixth and the game tied 1-1, Mitch Moreland hit a flyball to left field. Rays left fielder Randy Arozarena got under it, but Kiermaier called him off, caught the ball running laterally and had to turn to make the throw to the plate. Kiermaier's throw was accurate but late as Olson, who had led off with a double, slid in with the run that put the A's up 2-1.

"I know what it looked like from everybody else's vantage point," Kiermaier said, "but I believe I'm the best defensive outfielder in the game, and on that play, in a 1-1 game and the team not playing well, I'm doing everything in my power to preserve a 1-1 tie. I know I surprised Randy and I caught him off-guard and and he did absolutely nothing wrong.

"If it's anyone's fault, it's mine. It didn't work out. But I'm just trusting my instincts and trying to make a play out there. I'm very confident I can make that play."

Kiermaier, leading off for the first time this season, hit Montas' first pitch of the game for a triple and scored on an error by Oakland third baseman Vimael Machin.

The A's tied it in the second after singles by Moreland, Murphy and Stephen Piscotty loaded the bases with none out. Machin drove in the run with a groundball.

"It came down to one pitch, basically," Oakland manager Bob Melvin said. "On their first run we just didn't make a play. He threw the ball well."

Athletics: 3B Matt Chapman was out of the lineup for the first time this season for the same reason CF Ramon Laureano was the DH on Monday - manager Bob Melvin did not want them playing four straight days on turf. ... RHP Mike Fiers (lumbar strain) came off the injured list and will work in long relief until a spot opens in the rotation.

Rays: RHP Pete Fairbanks (shoulder) will throw another bullpen session Wednesday. ... LHP Cody Reed (thumb) and RHP Collin McHugh (back) will throw at the Rays' alternate site on Thursday and might be activated for next week's trip.

"I'm not going to second-guess anything KK does out there. We know the type of arm strength he has. I'm sure Randy was as shocked as anybody. I'm sure we'll discuss it going forward," Cash said about Kiermaier's play.