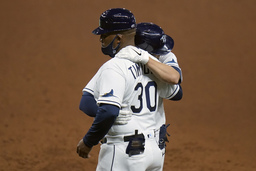 Michael Brantley and Carlos Correa had four hits each, and Alex Bregman hit a two-run homer for the Astros, who have won seven of nine following a 1-9 skid.

"It was a great win where we haven't gotten a lot of wins," said McCullers, who won for the first time in four starts since April 3.

He gave up three hits and three walks while throwing a season-high 111 pitches.

"My heater and my changeup have been off since we left spring training, and I was costing myself some really good performances," he said. "Today I just wanted to establish (the fastball) and Maldy (catcher Martin Maldonado) let me know how good it was throughout the game."

"He threw his fastball more and it was the best slider I've seen him have in a while," said manager Dusty Baker. "He found his rhythm at the end. It looked like his pitch count was rising. If it wasn't for those walks he probably could have gone eight or maybe finished in nine. But the nice thing is they didn't get any runs.

"I looked up and saw 93 pitches, and I thought he was going to pull me," he said. "But I was really happy he let me in, that I got that extra leash."

Bregman's fourth home run this season came with Brantley on base in a 35-pitch third inning against starter Ryan Yarbrough. Brantley, Bregman, Yordan Alvarez and Correa had consecutive hits in the three-run inning that put the Astros up 4-0.

Aledmys Diaz had two of Houston's 15 hits and drove in drove in four runs.

Willy Adames drove in Tampa Bay's runs with a bases-loaded single in the ninth.

Rays: LHP Rich Hill was placed on the COVID-19-related injured list, but the Rays are hopeful he can start Sunday's game. . . . 1B-OF Yoshi Tsutsugo was 0 for 3 with a walk after spending one day on the list.

Baker's 1,906th managerial victory moved him past Casey Stengel and into sole possession of 12th place on the all-time list. He stands 97 short of the recently retired Bruce Bochy, who is in 11th place.

Baker is the only manager in Major League history to take five different teams to the postseason.