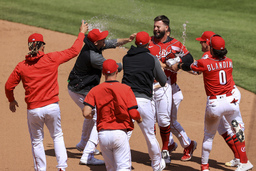 CINCINNATI (AP) Cincinnati's Joey Votto fractured his left thumb during a 10-inning, 1-0 win over the Chicago White Sox on Wednesday.

Votto was hit by a Dallas Keuchel pitch in the fourth inning. Votto remained in the game, but in the sixth was replaced at first base by Kyle Farmer.

Votto is not expected to need surgery but could miss up to a month. Hit by a pitch for the 61st time, Votto is hitting .286 on the homestand, which included his 300th home run. He has raised his average to .226 with five homers and 17 RBIs.

Kyle Farmer is among the options at first.

"It's a joy to pitch against him," Keuchel said. "You never want that to happen. I wish him well."

Jesse Winker hit a winning single in the 10th inning after Chicago's Leury Garcia was caught stealing in the top half.

It was only the fourth scoreless tie through nine innings in Great American Ball Park's history, the first since 2010.

"I knew how this game was going to play out," Gray said. "I just was focused on winning this game. We needed to win this game."

Cincinnati stopped its 18-inning scoreless streak as Liam Hendriks (1-1) lost for the first time since signing a $54 million, four-year contract with the White Sox as a free agent.

With automatic runner Tucker Barnhart on second, Nick Senzel singled against Hendriks leading off the 10th as Barnhart took third. Jesse Winker fouled off three pitches before lining the eighth offering from Hendricks into center field. Barnhart scored without a throw.

Hendriks got Barnhart to ground into a bases-loaded groundout that ended the ninth, then started the 10th as the automatic runner on second.

Lucas Sims (1-1) walked Yasmani Grandal leading off. Garcia grounded into a forceout that left runners at the corners and, with Billy Hamilton at the plate, Barnhart threw out Garcia trying to steal second.

"We were trying to be aggressive all game long," manager Tony La Russa said.

Hamilton then struck out.

Chicago, trying to contend despite losing outfielders Eloy Jimenez and Luis Robert to injuries this season, lost for the fourth time in its last 12 games.

Gray, making his fourth start after starting the season on the injured list with a muscle strain in his back, struck out eight. He has 19 strikeouts over his last 12 2/3 innings.

"Sonny was sharp, really comfortable and determined to go deep in that game," Bell said.

Senzel was thrown out at the plate in the first trying to score from third on Votto's grounder to first baseman Jose Abreu.

Both teams were a combined 0 for 9 with runners in scoring position through eight innings, stranding 11 runners. There were 29 runners left on base in all, 15 by the Reds.

La Russa said he did not know he could have used Abreu as the automatic runner in the 10th instead of Hendriks. The pandemic rule states the runner must be the batter preceding that inning's leadoff hitter, but there is an exception if the runner would be the pitcher. La Russa said he was unaware until told during a postgame media interview.

White Sox: OF Adam Eaton was given a day off due to a bruised knee and hamstring tightness. Eaton injured his knee running into the wall during Thursday's win over the Tigers.

Reds: OF Nick Castellanos was scratched due to back tightness and replaced in right by Tyler Naquin.