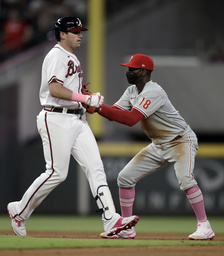 Freeman, the reigning NL MVP who began the game 1 for 24 in May, hit his ninth homer, a solo shot, to make it 5-1 in the third as the Braves won their second straight game and fifth in the last six. Freeman finished 3 for 3 and reached base four times, raising his batting average 20 points to .217.

Aaron Nola (3-2) took the loss after allowing four runs, five hits and one walk with four strikeouts in four innings.

Ynoa (4-1) gave up one run, four hits and one walk with six strikeouts in six innings. He pitched out of a jam in the third after Andrew McCutchen walked and Jean Segura singled, striking out Bryce Harper and J.T. Realmuto and retiring Alec Bohm on a dribbler in front of the plate.

Ynoa otherwise faced no major threats. In his last four starts, the 22-year-old right-hander has a 1.11 ERA. In four starts at Truist Park this season, he has a 1.54 ERA with 30 strikeouts in 23 1/3 innings.

"I've been very impressed with his adaptability, how he takes things and adjusts and applies them," Atlanta manager Brian Snitker said. "He's a bright kid. He grabs things and he understands and the adjustments he's made since we started in July last year is really cool to see. He's such a good kid and he works hard and he studies. It's good, because the guy's got skills."

Atlanta carried over momentum from winning in dramatic fashion Saturday night when it erased a two-run deficit in the ninth, a one-run deficit in the 11th and rallied to overcome Philadelphia's three-run lead to win 8-7 in 12 innings.

"Yesterday's game was huge for us," Freeman said. "To erase three deficits and to ultimately win that game, that was a huge momentum boost going into today. Getting 100% of the fans back and giving them something to cheer about, that was a good weekend for us."

The Phillies led 1-0 in the first when McCutchen, on the first pitch of the game, hit his fifth homer.

Atlanta went ahead 4-1 in the bottom of the first. Ronald Acuna Jr., back in the lineup after getting hit in the left pinkie and leaving Saturday's game in the seventh, walked, stole second and scored on Freeman's single. Freeman scored on Ozzie Albies' triple before Swanson added his fourth homer.

Austin Riley's RBI double made it 6-1 in the eighth.

"I know he'll be frustrated, but that's baseball, too," Girardi said. "Pitchers aren't going to be perfect. That's the bottom line. Tonight he didn't have his good stuff. He's worked really hard and maybe that had something to do with it, but I'm glad he gets an extra day (of rest) and again, I think it's really going to benefit our starters."

Atlanta RHP Chris Martin, who has missed the last 29 games with right shoulder inflammation, could return early in the week. Martin met Sunday with pitching coach Rick Kranitz to make sure his mechanics are in order.

BACK IN THE BULLPEN

RHP Shane Greene signed a $1.5 million, one-year contract to rejoin the Braves. The deal includes a prorated salary. Greene missed the first 38 days of the season, so he will receive about $1.19 million.

Greene was optioned to Triple-A Gwinnett and will need some time to get ready before he returns to the majors. The right-hander went 1-0 with a 2.60 ERA and 21 strikeouts in 27 2/3 innings for the Atlanta bullpen last season.

Atlanta reliever Tyler Matzek backpedaled off the mound and didn't look at the ball as he caught it behind his head and turned to begin a double play with Swanson at shortstop in the seventh.

The Phillies are off Monday. RHP Chase Anderson (1-3, 5.54) faces Erick Fedde (2-3, 5.27) when Philadelphia begins a three-game series at Washington on Tuesday.

Atlanta is off Monday. The Braves and Toronto Blue Jays have yet to announce a starter for Tuesday when they begin a three-game series at Truist Park.