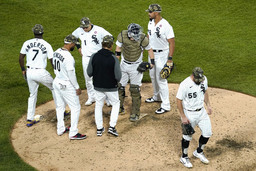 Same for Mike Minor taking on the Chicago White Sox.

Salvador Perez hit a three-run homer for the second straight day, and the Royals handed Rodon his first loss of the season with a 5-1 victory over the White Sox on Saturday night.

Rodon pitched six sparkling innings in a 3-0 victory at Kansas City in his previous start on May 7. But Royals manager Mike Matheny said before Saturday's game that he was looking forward to the matchup, and his optimism ended up being well founded.

"I thought we had some pretty good at-bats last time we faced him, without a lot of results," Matheny said after the win. "I don't know. I believe in this team."

Whit Merrifield doubled twice and scored twice as the Royals got to Rodon (5-1) for four runs in the first three innings. The left-hander allowed two earned runs in 31 innings while winning his first five starts of the year.

"He was fresh in our head from seeing him a week ago, and just did a better job of capitalizing on balls in the zone," Merrifield said.

The big blow was Perez's ninth homer, an opposite-field drive on a 96-mph fastball up and out of the zone in the third. The veteran catcher also hit a three-run shot during Kansas City's 6-2 victory over Chicago in the opener of Friday's doubleheader.

Perez departed in the eighth because of some left groin tightness, and he could rest during the series finale. But he seemed OK after the game, letting loose a good chuckle while acknowledging he wasn't exactly looking for the pitch that he homered on.

Rodon helped Chicago's bullpen by pitching into the sixth inning, but he was doomed by the shaky start.

"I started to feel it, like you said, in the last three innings," he said. "I just wish it would've shown up earlier on."

The early run support was more than enough for Minor (3-2), who pitched seven innings of two-hit ball in his first win since April 23. The left-hander struck out seven and walked two.

He got some help from his defense when Jarrod Dyson robbed Andrew Vaughn with a terrific catch in left for the second out of the seventh.

"I feel like we switched it up on them, to where they couldn't get in a rhythm of what I threw them last time," Minor said.

Carlos Santana homered in the ninth for Kansas City. Scott Barlow and Josh Staumont each got three outs, finishing a four-hitter.

The AL Central-leading White Sox dropped to 22-2 since the start of last season when their opponent starts a left-handed pitcher. Their only other loss occurred on April 11 when Minor got a no-decision in Kansas City's 10-inning victory.

Jose Abreu accounted for Chicago's only run with his eighth homer on the ninth pitch of his at-bat in the fourth. The drive to left gave him 33 RBIs on the year and 704 for his career, snapping a tie with Magglio Ordonez for 10th on the franchise list.

Abreu was back in the starting lineup after he got hurt in a collision with Kansas City's Hunter Dozier in Game 1 on Friday. The reigning AL MVP suffered a facial bruise and cut, along with a bruised left knee. Tests for a concussion were negative.

"Sometimes when you try to explain to people just how special he is, you've got to give examples and tonight was a perfect example," manager Tony La Russa said. "The fight to come back and get in the lineup and get the two hits, that shows you this guy is rare, man. He's one of the better ones."

The White Sox announced they have passed the 85% COVID-19 vaccination threshold for Tier 1 players and staff. That means some of MLB's coronavirus protocols will be relaxed for the team, including some movement restrictions on trips.

White Sox: C Zack Collins was shaken up after he was hit by Santana's backswing in the first inning. But Collins stayed in the game.

Right-handers Brady Singer (1-3, 4.18 ERA) and Dylan Cease (2-0, 2.80 ERA) start the series finale Sunday. Singer struggled in his previous start for Kansas City, allowing four runs and seven hits in 3 1/3 innings in a no-decision at Detroit. Cease is 2-0 with a 1.50 ERA in his last three starts for Chicago.