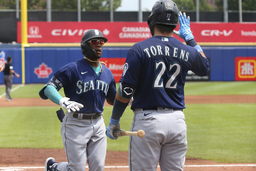 Kikuchi (6-3) struck out six and allowed five hits in winning his third straight start, moving to 5-0 in his last seven appearances. After a leadoff home run by Marcus Semien, the left-hander didn't let another Blue Jay reach second base until Teoscar Hernandez led off the seventh with a double.

In his last four starts, Kikuchi has allowed three earned runs over 26 2/3 innings for an ERA of 1.01.

"I haven't gone through a stretch like this here in the (United) States," Kikuchi said through a translator. "It's not like I've had my best stuff every time out, but I was able to make my adjustments and go deep into games. That's the biggest thing for me."

Mariners manager Scott Servais was especially impressed, given that Toronto ranks second in the American League in batting average and third in runs scored.

"That's one of the better hitting ballclubs in the American League and he got right after them," he said. "He had really good stuff and didn't back off. To get seven innings out of him against that kind of team says a lot about his effort and the season he's putting together. I said he's worthy of pitching in the All-Star Game and he backed it up."

Fraley, Mitch Haniger and Kyle Seager each had two hits for Seattle, which finished its road trip with a 4-2 record. Paul Sewald got the final four outs, all by strikeout, for his first save.

"A lot of things are clicking for us, so it's going well for us as a team," Fraley said.

Semien had three hits and Bo Bichette added two, including an eighth-inning RBI single, as Toronto absorbed consecutive losses for the first time since a five-game skid June 14-18.

"A lot of my pitches were just off the plate, and the hitters were being very patient," Ryu said through a translator. "My command was a little off, and that's what I'm more worried about."

Seattle struck early, taking a 2-0 lead in the first after the first three hitters reached on hits. Seager had an RBI single and Ty France added a sacrifice fly.

After Semien's leadoff homer - the 12th of his career - Fraley struck with a second-inning solo homer and Long lined a two-run shot to right-center in the third.

Toronto's Jekyll-and-Hyde bullpen was generally strong in relief of Ryu, as three pitchers limited Seattle to two hits over four innings before Tyler Chatwood allowed two runs in the ninth. Adam Cimber, acquired from Miami on Tuesday, made his Toronto debut and worked 1 1/3 innings.

WEARING THE RED, BUT MISSING THE TRUE NORTH

Even though they were playing in their temporary Buffalo home, Toronto wore their red jerseys and caps emblazoned with a maple leaf in honor of Canada Day.

Blue Jays manager Charlie Montoyo expressed some disappointment about not being able to play before Canadian fans at Rogers Centre.

Blue Jays: RHP Rafael Dolis (finger) will begin a rehab assignment with Triple-A Buffalo on Friday, Montoyo said. The Bisons are currently in a homestand in Trenton, New Jersey, while the Blue Jays continue their occupancy in Buffalo. ... LHP Ryan Borucki (forearm flexor) will throw a live BP early next week before beginning his rehab stint.

Blue Jays: Will host Tampa Bay on Friday, with RHP Alek Manoah (1-0, 3.34) coming off his five-game suspension for throwing at Baltimore's Maikel Franco. The Rays have not announced their starter.