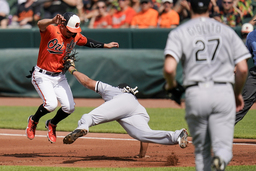 BALTIMORE (AP) Brian Goodwin matched a career high with four hits, including a solo homer, and drove in three runs as the Chicago White Sox beat the Baltimore Orioles 8-3 Saturday for their fourth straight win.

Chicago has won nine of its last 12 and has taken seven in a row from the Orioles dating to 2019, its longest streak against Baltimore since winning eight straight in 1989-90. The White Sox have outscored the Orioles 38-11 in six games this season.

Goodwin hit cleanup for the sixth consecutive game after drawing three starts there in his first 375 career appearances. He's fit splendidly with the White Sox --- regardless of his spot in the order --- since his call-up last month.

"It's really simple," said Goodwin, who was released by Pittsburgh May 3 and signed with the White Sox a day later. "When you take one look at the lineup and look at the guys on the scorecard, you know what they bring to the table. We have a good lineup. Looking one through nine, it's a lot of hitters in there. Just having confidence in them and them having confidence in me, it never feels like I have to do too much. I can just be myself."

Baltimore has lost three in a row and is 1-6 in July.

Lucas Giolito (7-6) struck out nine while allowing two runs in 5 1/3 innings to beat the Orioles for the second time this season.

Liam Hendriks struck out Ryan McKenna on three pitches upon entering in the eighth to escape a bases-loaded jam, then worked a perfect ninth for his AL-leading 23rd save.

Goodwin homered in the second, and the White Sox did more damage against Baltimore starter Thomas Eshelman (0-2) the following inning. Jake Burger lined a comebacker off the inside of Eshelman's left shin to lead off, though the pitcher remained in the game --- though not for long.

After a walk, freshly minted All-Star Tim Anderson doubled in a run and Yoan Moncada followed with a two-run double. Eshelman's day ended after another walk. He gave up four runs in two-plus innings and has not completed five innings in any of his five starts.

"It kind of swelled up on me after the last batter I walked a little bit," Eshelman said. "I just wanted to grind through it and hopefully get through the third and give the bullpen a break."

Goodwin's RBI single and Leury Garcia's run-scoring double in the fifth bumped the White Sox lead to 6-1. Goodwin singled in a run against a drawn-in infield in the seventh, then scored on another double by Garcia.

"I've seen guys get 100 RBIs and hit less than 10 home runs," manager Tony La Russa said of Goodwin. "He's got some power, as he's shown. He hit a home run today. He hits rights well and hangs in there against lefts. He's done an outstanding job for us, no matter where he hits."

Domingo Leyba had RBI singles in the fourth and sixth for Baltimore.

Orioles: Manager Brandon Hyde said LHP John Means (shoulder strain) will make his next rehab appearance next week for Triple-A Norfolk after allowing four runs (two earned) in three innings Friday at Double-A Bowie. "He said he threw the ball well and he made a couple mistakes and they hit them for homers," Hyde said. "But besides that, he's healthy and ready to make his next start."

White Sox: RHP Dylan Cease (7-4, 4.14 ERA) gave up one run in six innings while striking 10 on May 27 in his lone career outing against Baltimore.

Orioles: RHP Spenser Watkins (1-0, 1.50) is coming off his first career victory after allowing a run in five innings Tuesday against Toronto.