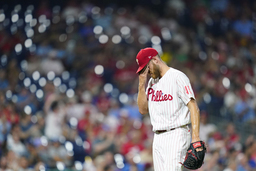 Rookie Wander Franco had two hits to extend his on-base streak to 26 straight games for the Rays, who have won eight of nine and upped their league-best record to 79-48. Tampa Bay moved 4 1/2 games ahead of the second-place Yankees in the division.

"We have confidence here," Mejia said through a translator.

Bryce Harper and Rhys Hoskins homered for the Phillies, who have lost six of eight to fall five games behind the idle Atlanta Braves in the NL East. Philadelphia is 4-10 since winning eight in a row earlier this month.

"I was just looking for a ball to hopefully hit in the air," Mejia said. "The hit I got there turned out better than I expected."

Collin McHugh (5-1) allowed the tying run in the eighth but pitched a scoreless ninth.

Wheeler looked like he was solidifying his NL Cy Young candidacy with eight strong innings until running into trouble in the ninth. Manager Joe Girardi sent Wheeler back to the mound after 93 pitches to try and finish the game.

"He trusted me and I didn't do my job," Wheeler said. "It stinks. It's just one of those that you forget."

Girardi stood by his decision.

Yandy Diaz led off by just missing a homer but was held to a single by right fielder Harper when the ball bounced high off the wall. Kevin Kiermaier followed with an opposite-field liner down the left-field line that was ruled a double by third-base umpire Sean Barber, who had to jump out of the way of the ball. Girardi came out to argue with plate umpire Dan Bellino that the ball was foul, but the call, which isn't reviewable, stood.

"My eyeballs told me it was foul," Girardi said.

Diaz and Kiermaier scored on Mejia's hit. Wheeler said he wanted to throw a pitch up and away; it was up but not away.

"If you make mistakes against this team, they make you pay," Girardi said. "And that's exactly what they did."

Wheeler exited after the homer without getting an out in the ninth. He allowed five earned runs on 10 hits and has a 6.53 ERA in his last three starts. He struck out 10 batters to exceed 200 Ks for the first time in his career, becoming the 14th Phillies pitcher to do so. The 31-year-old right-hander has struck out 204 batters.

The Rays took a 4-3 lead in the eighth on Randy Arozarena's RBI groundout to short.

Hoskins tied it in the bottom of the inning with a two-out homer to left off McHugh, his 27th this season. Hoskins returned to the lineup after not starting Tuesday's game as he continues to recover from a left groin strain that sidelined him for 14 games.

Harper crushed a two-run homer an estimated 445 feet to center with two outs in the fifth to tie the game at 3.

Lowe led off the fifth with a solo shot.

Freddy Galvis, acquired by the Phillies at the trade deadline from Baltimore, returned to the field after being sidelined by a right quad strain since June 26. Galvis, who previously played for Philadelphia from 2012-17, started at shortstop and made a throwing error in the second inning on his first chance. He was 0-for-3 with a strikeout.

Philadelphia, which began tied for seventh-worst in the majors in errors, committed two miscues and has 76 this season.

Girardi acknowledged the groin injury is affecting Hoskins in the field. Hoskins could have made a play on Franco's hard-hit ball in the fourth that was scored a double and stayed down after barely diving for Diaz's grounder in the hole later in the frame. In the eighth, Hoskins failed to come up with a fairly routine popup in foul territory.

Hoskins will not be in the lineup on Thursday, Girardi said.

Rays: After an off day, Tampa Bay plays the first of three at Baltimore on Friday night. LHP Shane McClanahan (8-4, 3.63 ERA) will start for the Rays. The Orioles haven't announced their starter.

Phillies: Philadelphia opens a four-game series against Arizona on Thursday night with RHP Zach Eflin (4-7, 4.17) opposing Diamondbacks RHP Zac Gallen (1-7, 4.59). Eflin has been out since July 16 with right knee tendinitis.