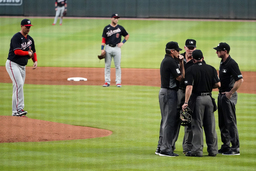 ATLANTA (AP) Juan Soto and Freddie Freeman showed goodwill after each star was hit by a pitch in the first two games of the Washington-Atlanta series.

And then Soto had the final word with a big swing.

The slugger crushed a go-ahead homer in the seventh and the Nationals relied on their bullpen after Sean Nolin's first-inning ejection to take a 4-2 win over the Braves on Wednesday night.

Soto's 462-foot drive off Richard Rodriguez (0-1) landed about halfway up the seats in right-center and snapped a 2-all tie. Luis Garcia's run-scoring double off Drew Smyly in the eighth drove in Yadiel Hernandez for a two-run lead.

Soto acknowledged his long homer was especially satisfying, one night after he was hit by a pitch from Braves closer Will Smith.

"It feels really good," Soto said before adding with a laugh: "It was impressive how far it (went)."

The NL East-leading Braves remained 2 1/2 games ahead of second-place Philadelphia, which lost 4-3 in Milwaukee.

Nolin was ejected after only eight pitches. He gave up a one-out single to Jorge Soler, who had three hits, before throwing a pitch behind Freeman.

Nolin hit Freeman in the hip with the next delivery, possible retaliation for Smith plunking Soto in the ninth inning of Atlanta's 8-5 win Tuesday night.

"When you miss the first time, that's your one chance and that's all you get," Freeman said, adding that after he was hit he told plate umpire Lance Barksdale, "`I'm sorry but that's two times, that's clear intent.'"

The umpires huddled before ejecting Nolin. With Nationals manager Dave Martinez wearing a soft cast following a procedure on his left ankle last Thursday, no one came out of the dugout to dispute the ejection.

Nolin insisted he didn't try to hit Freeman. He said the pitch behind Freeman slipped out of his hand and he hit the 2020 NL MVP when trying to pitch inside.

"After the first pitch flew out of my hand, there didn't seem to be anything going on so I was a little surprised," Nolin said, referring to no warning from the umpires.

After right-hander Patrick Murphy got two outs to end the inning, Freeman chatted with Soto as they walked off the field, each with an arm behind the other's back. Freeman then stopped by the railing of the Nationals' dugout for a friendly chat with Martinez.

It all was an unusual display of on-field diplomacy, which apparently was effective in putting an end to any talk of further retaliation.

Martinez said he wasn't surprised by the visit from Freeman.

"I've known Freddie for a long time," Martinez said. "He's that kind of guy. He understands that we both respect the game very much and I respect him and the feeling is mutual."

Washington led 2-0 before Atlanta got homers from Adam Duvall in the fourth and Eddie Rosario in the sixth. Rosario used a golf swing to lift a low curveball from Austin Voth into the right-field seats.

Five Washington relievers combined to give up only two runs. Murphy, claimed off waivers from Toronto on Aug. 14, threw 2 2/3 scoreless innings. Voth (4-1) allowed one run in 1 2/3 innings.

Kyle Finnegan gave up a single to Soler with two outs in the ninth before earning his eighth save on Freeman's lineout to left field.

Martinez said he might ask Nolin to be available for Thursday's final game of the series.

Josh Bell's 25th homer off Touki Toussaint to lead off the fourth was the first hit allowed by the right-hander. Toussaint struggled with his control, though. He hit a batter with a pitch and issued four walks, including two after Bell's homer.

Jacob Webb loaded the bases with a two-out walk before Freeman, with his back to the infield, caught Lane Thomas' popup in shallow right field to end the inning.

Nationals C Keibert Ruiz (right knee bone bruise) had two walks in his return to the lineup. He'll be busy the remainder of the season. "I want to get him out there and let him get accustomed to playing and let him play every day," Martinez said. ... SS Jordy Mercer (left calf strain) began a rehab stint with Double-A Harrisburg.

Braves: OF Ronald Acuna Jr. returned to Truist Park for the first time since having season-ending surgery in July to repair the torn anterior cruciate ligament in his right knee. Acuna has been going through a rehabilitation program in Los Angeles. "I think he's glad to be back here in Atlanta," manager Brian Snitker said.

Braves: RHP Huascar Ynoa (4-5, 3.19) has not allowed a run over 12 innings in two starts, including one win, against Washington.