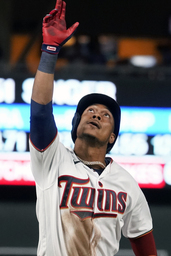 Byron Buxton homered for the second straight day, and Nick Gordon and Max Kepler also went deep for Minnesota, which has won five of seven.

Polanco had three hits in his third multi-homer game of the season. His 29 home runs match Chili Davis in 1991 for the most in a season by a switch-hitter for the Twins.

"I think the power stroke, it's not something that's really that much of a conscious effort from him," Minnesota manager Rocco Baldelli said. "He's not going up there taking swings that are unlike swings we've seen him take before. I think it's very much him dialing in, seeing the ball very well, not missing his pitches when he gets them."

Pineda (6-8) allowed one run on five hits. He was making his first start since returning from the injured list on Sept. 6 with a left oblique strain. He made his first career relief appearance on Sept. 6 before slotting back into the rotation.

"I can tell when I was in my bullpen before my start, I had really good feeling for my slider," Pineda said. "I use it. I tried to locate my fastball and go back to my slider and use it because we had really good movement today and I used it."

Brady Singer (4-10) surrendered six runs and six hits in 4 2/3 innings while striking out seven for Kansas City. Singer allowed all five homers. He had never allowed more than two in a game and had given up just nine long balls in 116 innings this season coming into the game.

All five home runs by the Twins were on two-strike counts.

"When I got to two strikes, I didn't really bury anything," Singer said. "It was kind of spinning out of my hand there, felt like the slider wasn't very good all night."

Polanco followed with his first homer, a liner to right field.

Buxton and Polanco teamed up again in the fifth. After Buxton singled on a soft fly ball to shallow center, Polanco launched a towering shot to the second deck in right field. Polanco has 14 homers in 36 games since the start of August.

"It's a fun way to win and it's kind of an explosive way to win," Baldelli said of the home runs. "The dugout really gets going and enjoys it, too, when you do it like this."

Andrew Benintendi continued his strong run for Kansas City, driving in the Royals' lone run in the fourth with an RBI single. Benintendi had two hits and has driven in 13 runs during the team's six-game road trip.

"We did have those big opportunities, a couple chances just to kind of chip away," Royals manager Mike Matheny said. "Those points in the game where you think, `We can really swing it here.' Just didn't have a lot of baserunners tonight, just a tough night."

Royals: RHP Joel Payamps was placed on the injured list before the game with no injury designation. RHP Scott Blewett was recalled from Triple-A Omaha.

Twins: C Mitch Garver (10-day injured list) has hit in the cages and thrown as he recovers from low back tightness. He's started to ramp up his baseball activities.

Rookie RHP Bailey Ober (2-2, 4.00 ERA) starts Sunday for Minnesota. Kansas City counters with LHP Kris Bubic (4-6, 5.07). Ober has allowed two earned runs or less in his last five starts with a 2.05 ERA during that span. Bubic is 1-0 with a 4.76 ERA in three games, including two starts, against the Twins this season.