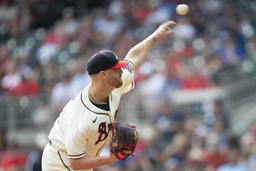 ATLANTA (AP) Ozzie Albies and Freddie Freeman each hit a solo homer off Anthony Bass in the seventh inning, Eddie Rosario went deep off Edward Cabrera in the fourth, and the Atlanta Braves beat the Miami Marlins 5-3 on Sunday.

The division-leading Braves, going for their fourth consecutive title, padded their lead to 4 1/2 games over Philadelphia.

Miami, far back in the division standings and playing the role of spoiler, had won two consecutive series against the Phillies and New York Mets before coming up short against Atlanta.

Rosario went deep for the 10th time to give the Braves a 2-1 lead. Cabrera left the game with right big toe soreness after Rosario homered.

Albies connected for the 28th time, sending a fastball into the right-field seats to make it 4-3. Freeman, on his 32nd birthday, followed two batters later with his 30th homer, an opposite-field shot to left.

"He hit his birthday blast," Albies said. "Right away when he got to the dugout everybody was singing `Happy birthday to you.' Homers are fun. I think that's why everybody celebrates them."

The Braves, who rank second in the NL in homers, tacked on a run to take a 3-1 lead in the fifth when Jorge Soler doubled to left and scored on Travis d'Arnaud's single to left.

"I don't know that anything is going to top last year, quite honestly," Braves manager Brian Snitker said when asked to compare this year's lineup to the last two. "That's about as good as I've ever been around. ... I think they're all just into the fact that we could do something here."

In the ninth, closer Will Smith allowed a leadoff triple to Jesus Sanchez and issued a one-out walk to Isan Diaz before retiring Alex Jackson on popup and Eddy Alvarez on a groundout to earn his 32nd save in 37 chances.

Braves starter Max Fried ran into trouble in the sixth. Lewin Diaz led off with his first career triple and scored on Miguel Rojas' single. Fried was charged with a fielding error on Jazz Chisholm Jr.'s sacrifice bunt and gave up Sanchez's RBI single to make it 3-all.

"I feel like we bounced right back into that game," Miami manager Don Mattingly said. "We get it to 3-3, Richard gives us a good inning that gives us another chance to score and obviously Albies and Freddie get us."

Fried allowed three runs and four hits with one walk and seven strikeouts in six innings. He had gone 1-3 with a 6.10 ERA in his first 10 career starts against Miami.

Cabrera, who made his fourth career start, allowed two runs and three hits with three walks and four strikeouts in 3 2/3 innings.

Sanchez gave the Marlins a 1-0 lead in the second with his third homer of the series and 10th overall, a 460-foot shot to center with an exit velocity of 112 mph.

"This kid is as strong as an ox," Mattingly said. "When he hits 'em, they go. He's one of those guys, in our ballpark, it doesn't really matter. His power is big. The ball he hit the other night was more of a line drive for him, and it ends up going in the seats out there. This kid has big-time power."

Cabrera escaped a jam in the second with two runners on by striking out Rosario. He stranded runners at first and third in the third with a strikeout of Austin Riley.

Marlins C-OF Jorge Alfaro was not in the lineup after leaving Saturday's win with left calf tightness. Mattingly said it was too early to tell when he can return.

Marlins: RHP Sandy Alcantara (8-13, 3.24 ERA) will face a yet-to-be-determined Nationals starter when Miami begins a three-game series at Washington. Alcantara struck out a career-high 14 batters in the Marlins' home victory Wednesday against the Mets.

Braves: RHP Touki Toussaint (3-2, 4.11) will pitch opposite RHP Jon Gray (7-10, 4.18) on Tuesday when Atlanta and Colorado open a three-game series. Toussaint received no decision after allowing five runs - four earned - in three innings of the Braves' 6-5 win at Colorado on Sept. 2.