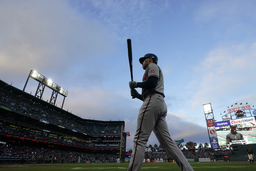 SAN FRANCISCO (AP) Alex Wood just wanted to find a nice rhythm again in his return from a bout with coronavirus, to continue working toward feeling at full strength come playoff time.

Curt Casali hit a two-run single in the fourth that held up, Wood made an impressive three-inning comeback from COVID-19, and the San Francisco Giants beat the Atlanta Braves 2-0 on Saturday night.

Wood struck out four and didn't walk a batter or allow a hit over three scoreless innings, throwing 37 pitches in his first start for San Francisco since Aug. 26 as he makes his return from a bout with COVID-19. Zack Littell (4-0) relieved and struck out the side in the fourth.

"I could have gone back out for the fourth, but they're looking at the long-timer picture as far as the rest of the season and the postseason and making sure I'm back and good to stay," Wood said. "That was a decision he made. But thankful for three innings, thankful for this team win."

This was marked a significant step for Wood, who dealt with a fever for seven straight days and was in bed for a full week while his wife also got very sick. He has declined to share his vaccination status.

Manager Gabe Kapler hopes to increase Wood's workload his next outing as he continues to regain stamina and strength.

"It represents a light at the end of the tunnel without having to run several bullpen games," Kapler said.

That reliable bullpen has continued to shine regardless of the scenario.

Dominic Leone, San Francisco's sixth reliever who started Wednesday as the opener in a bullpen game, finished the 2-hour, 40-minute game for his second save as the NL West-leading Giants maintained their two-game lead on the rival Los Angeles Dodgers in the division race.

Atlanta lost its fourth straight and had its NL East lead trimmed to one game after the Phillies beat the Mets.

"We were basically in a deadlock for four months of the season and playing behind," pitcher Charlie Morton said. "I really don't think that the challenge is any different in a bad way. If anything, I think we're still in a good spot. This is going to happen. We're going to play really good baseball, and we did and we put ourselves in a really good spot. Now we just got to right the ship."

Morton (13-6) allowed two runs on four hits with three strikeouts and three walks over five innings, but lost for the first time in his last nine road starts since June 11 at Miami.

Brandon Belt went 0 for 3 and had his 10-game hitting streak snapped a day after connecting for his career-best 26th home run in San Francisco's 6-5, 11-inning win.

The Giants also failed to hit a home run for the first time in 13 games, dating to Sept. 5. They had hit 26 total during that span. It was their longest such streak since doing so in 13 consecutive games from June 25-July 12, 2019.

Braves: Atlanta manager Brian Snitker expected RHP reliever Luke Jackson to return from the paternity list and rejoin the team late Saturday and be available to pitch in Sunday's series finale following the birth of his son in Atlanta.

Giants: RF Mike Yastrzemski returned to the lineup after missing three straight starts after being hit by a pitch on the right elbow Tuesday against San Diego. ... RHP Johnny Cueto (strained pitching elbow) played catch for a second straight day and extended out to 120 feet after throwing from 90 feet Friday. The plan remains for him to pitch live batting practice Sept. 27th or 28th, and he could potentially pitch before the regular season ends.

The Giants inducted 92-year-old former owner Bob Lurie into their Wall of Fame during a pregame ceremony outside the ballpark. He was the club's second owner of the San Francisco era that began in 1958 and at the helm during the 1989 earthquake-interrupted World Series swept by the cross-bay rival Oakland Athletics.

The left-handed Lurie threw out a ceremonial first pitch.

LHP Max Fried (11-7, 3.47 ERA) looks to improve to 3-0 lifetime against San Francisco over five career appearances, pitching opposite Giants RHP Anthony DeSclafani (12-6, 3.24), who will try to win consecutive starts for the first time since early July.