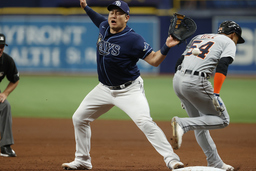 Tampa Bay has a 7 1/2-game margin over second place Boston. Toronto is 8 1/2 games back and the New York Yankees trail by 10.

With the Tigers ahead by a run, Mike Zunino opened the Rays' ninth by drawing a walk from Michael Fulmer and went to second when Joey Wendle was hit by a pitch. Fulmer got his 10th save in 15 chances by striking out Brett Phillips and getting Yandy Diaz to ground into a game-ending double play.

Jordan Luplow homered for the Rays, who trailed 4-0 in the second. Tampa Bay rallied from a three-run, ninth-inning deficit to beat the Tigers 7-4 in 10 innings on Friday night.

"I think we have a very good team and I think we are going to continue on forward," Tampa Bay right fielder Manuel Margot said through an interpreter.

Rays center fielder Kevin Kiermaier was placed on the COVID-19 related injured list with general illness symptoms before the game, and shortstop Taylor Walls was scratched from the lineup due to general illness.

Tigers center fielder Derek Hill left in the fifth with a left knee injury after laying a bunt down the first-base line, making contact with first baseman Ji-Man Choi near the bag and then stepping awkwardly on the back of the base. Hill was first put on a cart and then taken off the field in a wheelchair.

"I think he hyperextended it,"Detroit manager A.J. Hinch said. "I don't know how he avoids the IL at this point just given where were at in the season. It was an unfortunate play, to say the least.."

Choi had left wrist soreness after the collision but stayed in the game.

"Ji-Man seemed to be, after the initial shock reaction, the pain of it kind of subsided," Cash said.

Candelario put the Tigers up 3-0 in the first on his 16th homer off Ryan Yarbrough (8-6). He has gone deep four times in his last four games against Tampa Bay.

Garneau made it 4-0 with a homer leading off the second.

Luplow cut the deficit to 4-2wi th a two-drive off Tarik Skubal in the second.

Tigers reliever Jose Urena (4-8) allowed one run, on Choi's double-play grounder in the fourth, and two hits in 3 1/3 innings.

Yarbrough allowed four runs and five hits in six innings. He retired his final 13 batters. The lefty had given up 14 runs and 18 hits over 4 1/3 innings in his previous two appearances.

Detroit was held hitless over the final seven innings.

Skubal, who is having his workload limited late in the season, gave up two runs, two hits and struck out two over three innings. The lefty's stretch of having four or more strikeouts in 22 consecutive games came to an end the longest streak by a rookie since 1893, according to the Elias Sports Bureau.

OLYMPICS TO THE MAJORS

The Rays plan to add top pitching prospect Shane Baz to the taxi squad Sunday and have him start Monday against Toronto. The right-hander was on the United States Olympic team that won a silver medal at this year's Tokyo games. He went 3-0 with a 1.76 ERA in 10 starts with Triple-A Durham.

Tigers star Miguel Cabrera, who has 2,978 hits, had two potential base-hits taken away on nifty defensive plays and finished 0 for 4.

Shortstop Joey Wendle dove to field Cabrera's first-inning grounder and get a forceout at third, and Margot made a third-inning diving catch in right.

"It was kind of funny because he has given me a jersey and a bat previously" Margot said. "When I got to third base, he said `Hey, I'm going to want all that stuff back."

Rays: DH Nelson Cruz, hit on the right forearm by a pitch Thursday, was out of the lineup for the second straight game.

Rays LHP Shane McClanahan (9-5) will return after missing a start due to lower back tightness and go against Detroit RHP Wily Peralta (3-3) Sunday.