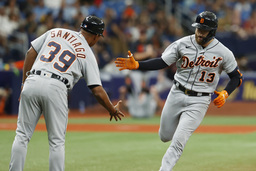 ST. PETERSBURG, Fla. (AP) Wily Peralta gave up three hits in seven innings, and Eric Haase and Dustin Garneau homered for the Detroit Tigers in a 2-0 win over the AL East-leading Tampa Bay Rays on Sunday.

Peralta (4-3) and three relievers limited the Rays to five singles as Detroit, third in the AL Central at 72-78, won for the seventh time in 10 games.

Tampa Bay has 12 games to play, leads the AL East by 6 1/2 games and is headed to its second straight division title.

Peralta walked three and threw a season-high 100 pitches. He had been 0-2 with a 4.60 ERA in nine starts since beating Minnesota on July 18.

"Getting to 100 pitches was really key," Detroit manager A.J. Hinch said. "I joked that we were going to leave him out there until his arm falls off because we were really thin. But he kept putting up zeroes."

Kyle Funkhouser pitched the ninth for his first save since April 30, 2013, for Louisville against Western Kentucky in college.

"It's really mportant for us," Peralta said. "Shows we're headed in he right direction."

Shane McClanahan (9-6) gave up one run, two hits and two walks in five innings, striking out seven. He threw 64 pitches after skipping a turn due to lower back tightness.

"I felt good today, and really I've felt good all season," he said. "Obviously I didn't want to go on the IL."

Haase hit his 22nd home run in the fourth, and Garneau hit his sixth off Nick Anderson in the seventh.

Mike Zunino had three of Tampa Bay's hits and was one of only two Rays to reach third base, advancing on two wild pitches by Jason Foley in the eighth. Garneau threw out two of three Tampa Bay runners trying to steal, and Detroit turned two double plays.

Tigers: LHP Gregory Soto (fractured tip of his left ring finger) and OF Derek Hill (left knee sprain) were placed on the 10-day injured list. An X-ray revealed Soto's fracture after he was struck by a line drive in the ninth inning of Friday's game. Manager A.J. Hinch said the closer is likely finished for the season. ... OF Daz Cameron and INF Isaac Paredes were recalled from Triple A Toledo.

Rays: OF Kevin Kiermaier was reinstated after spending one day on the COVID-19 related injured list. ... DH Nelson Cruz was 0 for 2 with a walk in his first game since he was hit by a pitch on his right forearm Thursday. ... 1B Ji-Man Choi was 0 for 2 with two walks after injuring his left wrist in a collision Saturday.

Tigers: RHP Matt Manning (4-6, 5.75) is tol pitch against the Chicago White Sox on Monday night in the opener of a six-game homestand.

Rays: RHP Shane Baz, 3-0 with a 1.76 ERA in 10 starts at Triple-A and a pitcher for the U.S. at the Olympics, is to make major league debut Monday night against Toronto. "The Olympics was definitely nerve-racking, even moreso that there were no fans there, so you didn't really have the buzz of the crowd to keep you into it," Baz said. "It was really strange but I think it helped me a lot. I think I was more nervous for that than I am now."