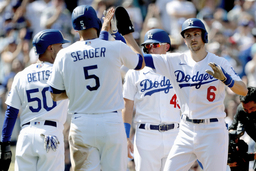 LOS ANGELES (AP) Trea Turner ended the regular season with a bang, hitting his second grand slam in less than 48 hours to easily wrap up the NL batting title.

"Any time you can win anything in this league, it's special," he said. "It's pretty cool and proud of it."

The Dodgers came up just short in their bid to unseat the rival San Francisco Giants for the NL West title, beating Milwaukee 10-3 Sunday for their 106th victory only to finish as the winningest second-place team in major league history.

The Dodgers' streak of eight straight NL West titles ended with them one game behind the Giants, who beat San Diego 11-4 for their 107th victory.

"They took it from us," manager Dave Roberts said. "They had an even better regular season."

The Dodgers host St. Louis in the NL wild-card game on Wednesday, and the winner plays the Giants in the NL Division Series.

Turner hit .328, well ahead of former Washington teammate Juan Soto, who went 0 for 3 Sunday to end at .313. Turner went 1 for 3 with four RBIs and extended his hitting streak to 19 games while making a case for NL MVP honors.

"I don't know why Trea isn't getting spoken about in the MVP as much," teammate Walker Buehler said. "He's had a year that not many players have had. He's a special player and kind of a game-changing player. I think Trea Turner needs to be on the minds of some people."

Turner said he was expecting a post-game text from Soto.

Turner also led the league in hits (195), stolen bases (32) and total bases (319). He joined the Dodgers at the July 30 trade deadline from Washington, along with All-Star pitcher Max Scherzer, a strong contender for the NL Cy Young Award.

The Dodgers (106-56) tied a franchise record for wins set two years ago. They won their franchise-record 15th in a row at home.

Buehler (16-4) allowed one run and three hits in five innings of his career-high 33rd start. He struck out a season high-tying 11, including six of his first eight batters, and walked one. His wins are a career high.

"I checked a lot of boxes for myself and a lot of goals," he said. "To make 33 starts is the biggest thing for me."

Los Angeles' 106 wins were the most for a team that failed to finish first, one more than the 1909 Chicago Cubs and 1942 Brooklyn Dodgers.

The Dodgers capitalized with three walks and two infield hits in the fifth before Turner's fifth career slam gave them a 6-1 lead. He had a slam on Friday in the series opener and six homers in the last eight regular-season games.

Corey Seager, who went 3 for 3, reached on an infield single to first, scoring Taylor with the go-ahead run. That loaded the bases again to set up Turner, who gave the Dodgers their franchise-record 11th grand slam of the season.

Beaty finished 3 for 3 with a three-run homer in the eighth.

Milwaukee scored its runs on RBI doubles by Avisail Garcia (his career-high 86th RBI) in the first, and Rowdy Tellez and pinch-hitter Eduardo Escobar in the eighth.

With nothing on the line, the Brewers sat Christian Yelich, Kolten Wong and Lorenzo Cain. The NL Central champions play Atlanta in the Division Series starting Friday.

The Brewers closed on a losing note, dropping four in a row, going 1-5 on their road trip and 4-10 over their last 14.

"The goal of this thing is to win the division. We won it early and after that, there wasn't a lot for us to achieve as a group," manager Craig Counsell said. "Some other things are more important, like making sure we were healthy going into the playoffs. I prioritized that."

Milwaukee's Corbin Burnes is the first pitcher in franchise history to win the ERA title. He topped the league at 2.43. Dodgers starters Max Scherzer and Buehler were second and third, respectively, at 2.46 and 2.47.

"That's a sign of how dominant he's been, better than any other starter in the league," Counsell said. "When you win 95 games, you'll have a lot of guys with really special seasons and Corbin is at the top of that list, for sure."

FIRST IN A WHILE

Turner is the first Dodger to win a batting title since Tommy Davis won back-to-back crowns in 1962 and '63.

He's also the first Dodger to lead the league in hitting and stolen bases since Jackie Robinson in 1949. Robinson hit .342 and stole 37 bases that year.

The Dodgers led the majors in attendance, drawing 2,804,693 despite not being able to have full capacity earlier in the season because of the coronavirus pandemic. Last year, they played in front of cardboard cutouts.

The Dodgers recalled right-handed pitcher Andre Jackson for his fourth stint with the team. He pitched three innings, giving up two runs and four hits while striking out three. Right-hander Mitch White was optioned.

Dodgers: 1B Max Muncy left in the third after injuring his left elbow. Jace Peterson bunted and arrived at the bag at the same time as the ball, when Muncy had his left-handed glove in front of Peterson. The runner was called out for interference. Muncy had tests that were "unclear," according to Roberts. He said it's "very unlikely" Muncy would play in the wild-card game, while adding, "I just don't want to count Max out."