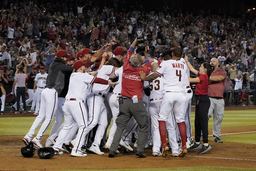 PHOENIX (AP) Seth Beer's game-winning, three-run homer in the bottom of the ninth inning hadn't even landed yet Thursday night and Pavin Smith was already thinking of endorsement deals for his rookie teammate.

"He hits a homer, dollar beers in the stadium?" Smith said. "I mean, that's a layup, right?"

The beverage jokes were plentiful after Beer's blast to deep right field off Craig Stammen gave the Arizona Diamondbacks a 4-2 victory over the San Diego Padres. If the rookie keeps coming up clutch in moments like that, he might be remembered for more than just his popular last name.

"It was a surreal feeling," Beer said. "It's still a dream."

The Padres lost because of a bullpen meltdown. San Diego took its two-run advantage into the ninth but Robert Suarez (0-1) - who was making his major league debut - walked the first two batters he faced and then hit Carson Kelly with a pitch to load the bases.

Stammen entered and immediately threw a wild pitch that scored Christian Walker to make it 2-1. And then Beer, in just his 13th big league at-bat, crushed a breaking ball that gave the Diamondbacks a comeback win on National Beer Day in the United States.

Diamondbacks fans chanted Beer's last name in celebration as he rounded the bases. Walker said the rookie's poised at-bat is a great example of the team Arizona wants to be one year after losing 110 games.

"That's what it's all about, not giving in, holding your ground," Walker said.

San Diego took a no-hitter into the seventh but Arizona's first batter of the inning, Smith, laced a line-drive single off reliever Tim Hill.

The decision by new Padres manager Bob Melvin to take Darvish out of the game wasn't a surprise: Pitchers all around the majors are on limited pitch counts following a lockout-shortened spring training.

"I don't know how much better he could do," Melvin said.

Ha-Seong Kim - starting at shortstop in place of injured San Diego star Fernando Tatis Jr. - didn't get a hit but managed to score twice after reaching on a walk and a fielder's choice. He also had a stolen base.

Diamondbacks left-hander Madison Bumgarner - making his eighth opening day start - threw two scoreless innings before trouble in the third. He walked four Padres, needing 42 pitches to get through the inning, and Luke Voit's walk forced in Kim to give San Diego a 1-0 lead.

Bumgarner struck out Wil Myers to end the threat, but the pitcher's day was done. He gave up one run and one hit over three innings.

It was a warm opening day in Phoenix and it was 93 degrees for the 6:40 p.m. first pitch, though it cooled off quickly once the sun went down. The T-shirts and shorts provided a much different scene than places like Chicago, St. Louis and Kansas City, where cold and blustery conditions were the norm.

Joe Mantiply (1-0) earned the win with a scoreless ninth.

Looking for bullpen help, the Padres shook up their roster on opening day, adding All-Star reliever Taylor Rogers and outfielder Brent Rooker in a trade with Minnesota. Melvin said pregame that Rogers would immediately slide into the back of the bullpen when he arrives. Rooker will start in Triple-A.

Jurickson Profar started in left field, giving the Padres a little continuity at the position.

Profar's second opening day in a row in left snapped a streak of 17 straight years in which San Diego started a different left fielder. Ryan Klesko started in left in 2004 and 2005.

That's the second-longest streak in MLB history behind the St. Louis Browns/Baltimore Orioles, who started different left fielders 19 years in a row from 1937-55.

Padres: San Diego opened the season with two players on the 10-day injured list: RHPs Mike Clevinger and Luis Garcia. Tatis is on the 60-day IL after having surgery during spring training on his broken left wrist.

The Diamondbacks and Padres meet Friday night for the second game of a four-game series. RHP Merrill Kelly starts for Arizona against Padres newcomer Sean Manaea.