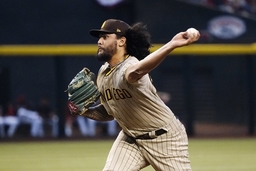 Manaea was dominant on the mound in his first outing with his new team, Jurickson Profar hit a two-run homer and San Diego beat the Arizona Diamondbacks 3-0 for its first win of the season.

Melvin and Manaea are both transplants from the Oakland Athletics. Melvin was hired in the offseason after 11 seasons with the Athletics and Manaea was added in a trade earlier this week. Melvin said Manaea's best traits from Oakland - working fast and throwing strikes - were on full display.

"I've seen him have some good games," Melvin said. "This ranks right up there with them."

Said Manaea: "Everything was working."

The left-handed Manaea handed his no-hitter off to the Padres bullpen a night after Yu Darvish did the same. Tim Hill gave up a leadoff single to David Peralta in the eighth, the second day in a row the left-handed reliever blew a no-hit bid.

The Padres are the only team in modern era to have a starting pitcher give up no hits through at least six innings in back-to-back games, according to STATS.

Manaea (1-0) was pulled after throwing 88 pitches, including 66 strikes. Melvin's decision wasn't much of a surprise since pitchers all around the game are on strict limits because of the lockout-shortened spring training.

It also helped that Melvin was the manager in Oakland when Manaea threw a no-hitter in 2018, so he knew he wasn't robbing him of his only opportunity at history.

"He's got one in his pocket," Melvin said. "His velocity was down just a little the last inning. ... It was time to go, he knew that."

Darvish pitched six no-hit innings on Thursday before being pulled, and the Diamondbacks ended up rallying for a 4-2 win off San Diego's bullpen in the ninth, capped by Seth Beer's game-ending, three-run homer.

There would be no rally for Arizona on Friday. Beer flew out to center field with runners on first and third to end a threat in the eighth. Taylor Rogers - making his first appearance for the Padres since being acquired in a trade with the Twins - earned the save.

Rogers wasn't available to save Thursday's game because he was still traveling after the trade. The left-hander had no trouble in the ninth on Friday, retiring the D-backs in order.

Manaea's terrific first outing is a good sign for the Padres, who acquired him in a trade with the Athletics earlier this week. He was 11-10 with a 3.91 ERA for the A's last season.

WELCOME TO THE SHOW

San Diego's C.J. Abrams made his big-league debut, starting at shortstop and batting eighth. He was hitless in four at-bats but did make a nice defensive play in the ninth, going deep into the hole toward third base to field a ground ball before throwing out Cooper Hummel.

He grounded into a fielder's choice in his first at-bat. The 21-year-old - who is among the team's prized prospects - was then caught stealing when he tried to swipe second. The speedster beat the throw by a lot, but then slid past the bag and was tagged out.

He nearly hit his first homer in the sixth inning, but it was caught by D-backs right fielder Pavin Smith on the warning track.

Beer was the hero on opening night for Arizona Diamondbacks fans. On Friday, too, before even taking the field.

One day after Beer blasted a game-ending, three-run homer against San Diego, the Diamondbacks capitalized on the publicity with a promotion that gave a free Coors Light to the first 10,000 fans who came to the park that were 21 years and older.

Beer didn't start on his own beer night because he's a left-handed batter and the Padres were starting the left-handed Manaea on the mound.

Beer did pinch-hit in the eighth with two outs and runners on first and third. He flew out to center field to end the inning.

The Padres and Diamondbacks meet for the third of a four-game series on Saturday night. RHP Zach Davies gets his first start for the D-backs since joining the team in March. RHP Joe Musgrove will pitch for the Padres.