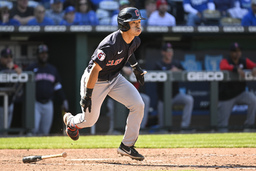 KANSAS CITY, Mo. (AP) The only big mistake that Cleveland rookie Steven Kwan has made during his first four big league games came in left field, where he was trying to rush a catch-and-throw to the plate and had a flyball bounce off the heel of his glove.

He hasn't made many mistakes with a bat in his hands.

And after that gaffe in the outfield Monday, the 24-year-old from Oregon State came right back to belt a bases-loaded triple, becoming the first player to reach base at least three times in each of his first four games while leading the rechristened Guardians to a 10-7 victory over the Kansas City Royals.

"He was trying to do it a little too quick and it hit the heel of his glove. But then his at-bat was terrific," Guardians manager Terry Francona said. "His at-bats are really, really good. That's stating the obvious."

Might as well drive home the point: Kwan went 5 for 5 and reached safely six times a day earlier, when Cleveland rolled to a 17-3 win over the Royals. He reached base three more times and added his first three RBIs on Monday, finishing the series 9 for 13, reaching base in 15 of 19 plate appearances and scoring four times.

Oscar Mercado added a two-run homer for the Guardians, who scored just once over the first two games in Kansas City but piled up 27 runs over the last two. The result was a split of the season-opening set between AL Central rivals.

"I'm done trying to figure this out," Francona said of the scoring disparity.

Logan Allen (1-0) earned the win Monday with two scoreless innings of relief in his first appearance of the season.

The finale was tied 4-all in the seventh when Royals reliever Jake Brentz (0-1) gave up a single, sacrifice bunt and walk. Josh Staumont then gave up bloop singles to Jose Ramirez and Franmil Reyes as Cleveland took a 6-4 lead.

The Royals loaded the bases in the bottom half against Bryan Shaw before Hunter Dozier hit a flyball that Kwan dropped. As a run crossed the plate, Myles Straw threw out a runner at second base in a bang-bang play that stood upon video review. Nick Sandlin relieved and got Adalberto Mondesi to ground into an inning-ending double play.

"Just tried to do too much," Kwan said of the flyball that got away from him.

Not to worry. Kwan atoned for the mistake with his triple in the eighth inning.

"He's a tough out. You can tell that already," Royals manager Mike Matheny said.

Kwan's now gone 72 plate appearances, including Triple-A and spring training, since his last strikeout, and his 15 times on base through his first four games is the most since in the major leagues since at least 1901.

"There are a lot of player development people who have their chest out right now, as they should," Francona said. "I know we're four games in, but every single one of them kept saying `Hey, he's going to be OK, man.' So I know they're proud."

Mercado also had a big finish to the series. He hit a grand slam and had five RBIs in the Guardians' 17-3 romp Sunday, then drilled a two-run homer into the left-field bullpen to give Cleveland a 4-1 lead in the fourth on Monday.

"I mean, shoot, man, we're rooting for everybody," Francona said. "We're not biased. We want everybody to do well."

The Royals answered Mercado's latest shot in their typical fashion: They scratched and clawed and scrapped for runs. It took two singles, a walk, a sacrifice bunt, a stolen base, an error and a run-scoring groundout, but the Royals managed to coax three runs in the fourth inning to even the score 4-all.

Only one of the four runs off Cleveland starter Aaron Civale was earned, and he left after 3 1/3 innings. Carlos Hernandez lasted another inning for Kansas City but was responsible for all four runs that he allowed.

Guardians OF Josh Naylor was 3 for 13 through four games at Triple-A Columbus as he continues to work his way back from a right ankle injury. He is expected to play two more games in the minors this week before being reevaluated.

The Royals reinstated RHP Joel Payamps from the family emergency list and optioned RHP Jackson Kowar to Triple-A Omaha. Kowar, who will start in the minors, allowed seven runs on 11 hits and a walk in 3 1/3 innings of relief Sunday.