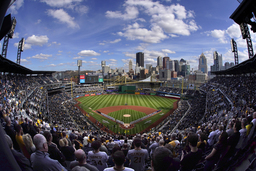 Suzuki connected for leadoff shots in the fifth and seventh. One of the top players in Japan, Suzuki signed an $85 million, five-year contract with the Cubs last month.

"I'm just trying to stay aggressive and trying to make the pitcher throw more pitches," Suzuki said through a translator. "Obviously I'm getting lucky, and I just want to continue to contribute like this."

Smyly (1-0) permitted three hits and walked none in his Cubs debut. The left-hander agreed to a one-year contract last month.

Smyly also signed a $10 million, two-year contract with the Cubs in December 2017, but he never pitched for Chicago. Working his way back from Tommy John surgery, he ran out of time to get into a big league game in 2018 and was traded to Texas that November.

Smyly chuckled when asked about finally making his Cubs debut.

"Everything works out for a reason, everyone has a different path," Smyly said. "I've been very lucky in my career, and I feel very fortunate to be back here and pitching for the Cubs. It felt good to go out there, pitch well and help the team win a game."

The Pirates got their only run on Bryan Reynolds' homer against Mychal Givens in the eighth.

David Robertson worked a perfect ninth for his second save.

Jose Quintana (0-1) made his first appearance for Pittsburgh, pitching five effective innings against one of his former teams. The veteran lefty joined the Pirates as a free agent in November after posting a 6.43 ERA in an injury-plagued 2021 season with the Los Angeles Angels and San Francisco.

"All day long, I thought he threw the ball well," Pittsburgh manager Derek Shelton said. "If he goes out in the rest of his starts and throws the ball like that, we're going to be in pretty good shape."

Suzuki drove a full-count pitch from Quintana deep to right-center in the fifth. He connected against Anthony Banda in the seventh for his third homer in his fourth major league game.

"There was not too much information on him," Quintana said of Suzuki. "I tried to follow the plan, to throw the fastball close to him. I think when he hit the homer, the ball came back over the middle. He's tough."

Suzuki has reached base at least twice, scored a run and driven in a run in each game. The last Cubs player to start the season with a longer streak was Mark Grudzielanek with five in 2003.

"He's really done a good job of controlling the strike zone," Cubs acting manager Andy Green said. "He chased a little in spring training and he was probably trying to show some things. But since the season has started, he has really made the pitchers throw strikes."

Ian Happ had two hits for Chicago. He is 7 for 10 in three games so far this season.

Cubs right-hander Keegan Thompson has appealed his three-game suspension for hitting Milwaukee's Andrew McCutchen with a pitch Saturday. He remains eligible to play until the appeal process ends.

Ross served his one-game suspension for the incident. Green, who managed San Diego from 2016-19, ran the club in Ross' absence.

"It's out of my control. It's part of the rules," Ross said when asked if he thought the suspension was justified.

The Pirates and third baseman Ke'Bryan Hayes finalized an eight-year, $70 million contract before the game. The deal runs through the 2029 season and includes a club option for 2030.

Cubs: RHP Kyle Hendricks (0-0, 1.29 ERA) starts on Wednesday. He allowed one run in 5 1/3 innings against Milwaukee on opening day.

Pirates: RHP Zach Thompson (3-7, 3.24 ERA in 2021) makes his debut for Pittsburgh after being acquired from Miami in an offseason trade.