Pujols homers, gets 3 hits to propel Cards past Royals 6-5 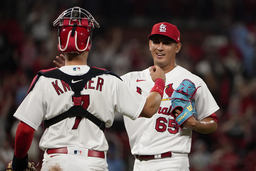 The veteran slugger told Cardinals manager Oliver Marmol he was going to hit the first pitch he saw Tuesday night for a home run - and then did just that.

Pujols homered for the first time since returning to St. Louis and Andrew Knizner launched a three-run shot as the Cardinals defeated the Kansas City Royals 6-5 on Tuesday night.

"When you have 680 you can make those kind of calls," Pujols said. "I had a good feeling. Sometimes you get lucky, and it happens."

Nolan Arenado also went deep for St. Louis, which has won 20 of 27 interleague games against the in-state Royals since Aug. 7, 2017.

Salvador Perez homered twice and Michael A. Taylor also connected for Kansas City, which has allowed 33 runs in losing its last three games.

The 42-year-old Pujols, who also singled twice in a 3-for-4 performance, signed with St. Louis on March 28 for his final season. He played for the Cardinals from 2001-11, helping them win two World Series.

In the first inning, Pujols slammed the first pitch he saw from Daniel Lynch over the wall in left field, much to the delight of the crowd, which chanted his name before he stepped out of the dugout for a curtain call.

"He's The Machine for a reason," Knizner said. "I can't say enough about how he played tonight. That was an excellent display of hitting, squaring the ball up all over the field. It was impressive to watch."

Marmol was impressed that Pujols was able to back up his batting practice boast.

"He's never told me that before," Marmol said. "I believed him."

Pujols' drive came on the very next pitch after Arenado clocked a two-run shot. Arenado has three homers and nine RBIs this season.

Knizner, making his first start of the year, ripped a long drive just inside the left-field foul pole in the fourth to put the Cardinals ahead to stay, 6-3.

"I think it was a slider," Knizner said. "He just happened to leave that one up and I put a good swing on it. I kind of blacked out. That sometimes happens when you hit home runs. It comes out of the right tunnel and you're just trained to swing."

Giovanny Gallegos got his first save of the season.

Lynch (0-1) allowed six runs and nine hits over five innings. He struck out seven and walked one.

Perez hit solo shots in the second and eighth for his 13th career multi-homer game.

"It feels great, but the most important thing is to win the game," Perez said. "If I hit a homer and we lose, I feel kind of horrible for the team."

Marmol returned to the bench after missing the previous two games with the flu.

The Cardinals have scored in the first inning of all four games this season for the first time since 1901.

Kansas City OF Whit Merrifield played in his 474th consecutive game, the longest run in the majors since Prince Fielder played in 547 successive games with Milwaukee, Detroit and Texas from Sept. 14, 2010, to May 16, 2014.

The Royals will play their first 13 games in Missouri, the longest home-state run since the San Francisco Giants played their first 17 games in California in 2019.

Kansas City manager Mike Matheny returned to St. Louis, where he managed the Cardinals from 2012-18. He guided them to the postseason in each of his first four seasons, becoming the first manager to accomplish that feat.

Kansas City RHP Zack Greinke (0-0, 1.59 ERA) will face RHP Adam Wainwright (1-0, 0.00) in the finale of the two-game series Wednesday afternoon. Greinke is 13-6 with a 3.85 ERA in his career against St. Louis. Wainwright threw six innings in a 9-0 win over Pittsburgh on opening day. The two have combined for 404 wins, with Greinke recording 219.