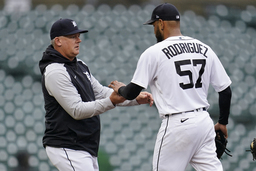 Jackie Bradley, Kike Hernandez and Rafael Devers hit consecutive RBI doubles in the fourth inning to chase Rodriguez, and the Boston Red Sox held on to beat the Detroit Tigers 9-7 Wednesday and win the three-game series.

"He was middling a lot and when we got him in the zone, we did damage," manager Alex Cora said.

Boston went into the fifth inning ahead 7-1 and led by 9-2 after batting in the seventh, and its comfortable cushion became a precarious two-run lead going into the final inning.

Hansel Robles got out of a bases-loaded jam in the eighth by getting Jonathan Schoop to pop up on the infield and retired the side in order in the ninth, earning the save.

"He did an amazing job," Cora said.

Nathan Eovaldi (1-0) allowed up Schoop's solo home run in the first inning and not much else until Akil Baddoo hit a solo homer in the fifth. Eovaldi allowed two runs, four hits and a walk over five innings.

Rodriguez (0-1) gave up a tiebreaking sacrifice fly to Alex Verdugo for the second out in the fourth before third baseman Jeimer Candelario made a throwing error on Christian Vazquez's grounder on a rain-soaked field.

Boston made the most of the opportunity, hitting three straight run-scoring doubles to left to end Rodriguez's outing.

"If you make a mistake, you're going to pay for it," Rodriguez said. "That's what happened in that inning.

Trevor Story followed with a RBI single off Rony Garcia to give the Red Sox a 7-1 lead.

Rodriguez allowed up seven runs - two earned - five hits and three walks over 3 2/3 innings in his second start with the Tigers. He signed a $77 million, five-year contract in Detroit after playing in Boston for six seasons.

Tigers rookie Spencer Torkelson, the No. 1 overall pick in the 2020 amateur draft, cleared the fences for the first time in the majors with a two-run homer in the seventh to cut the deficit to 9-4.

"It's something to build on," Torkelson said.

Detroit scored five runs over the seventh and eighth innings.

Jake Dieskman entered with no outs in the eighth and struck out pinch hitter Miguel Cabrera and Baddoo before giving up Victor Reyes' single and hitting Austin Meadows to let the Tigers pull within two runs and to end his appearance.

Red Sox: Story played after missing three games with an illness. "He told me this morning, `I'm ready to go," Cora said. "I'm not gonna go against that." ... SS Xander Bogaerts was given the day off due to general soreness, according to Cora.

Tigers: SS Javier Baez was a late scratch with a sore right thumb. ... OF Robbie Grossman, who left Tuesday's game after the sixth inning with an injury, did not play in the series finale. "We're going to give it 24 hours," manager A.J. Hinch said Wednesday morning. "It sounds like it's less groin and a little bit more back tightness."

The start of the game was delayed briefly after home plate umpire CB Bucknor appeared to get hit in the throat by one of Rodriguez's warmup pitches.

Red Sox: After winning three of four games to split a six-game road trip, Boston has a day off on before its home opener against Minnesota begins a stretch of playing on 17 straight days. The Red Sox are scheduled to start RHP Nick Pivetta (0-1, 6.35 ERA) after Twins right-hander Joe Ryan (0-1, 4.50) on Friday afternoon.