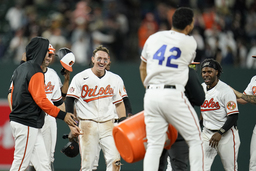 BALTIMORE (AP) Aroldis Chapman's offspeed pitch was a bit high - and in a game that came down to the bullpens, it was Baltimore's unheralded group that prevailed.

Chapman walked home the winning run in the 11th inning to give the Orioles a 2-1 victory over the New York Yankees on Friday night. Baltimore's bullpen was flawless, allowing just one batter to reach base in 5 2/3 innings - and even that hit was the result of an official scoring quirk.

"It was pretty awesome to be a part of that tonight," said Bryan Baker, one of five Orioles relievers who pitched.

Baltimore won despite going 1 for 15 with men in scoring position. The Orioles drew 10 walks in the game, including three in the 11th, when they finally scored to win it.

Anthony Bemboom and Kelvin Gutierrez drew one-out walks against Clarke Schmidt (0-2). A night after throwing just four of 16 pitches for strikes against Toronto, Chapman came on and struck out Cedric Mullins before walking Ramon Urias on a full count slider that was just high.

New York manager Aaron Boone was ejected by plate umpire Tom Hallion at the conclusion of the game.

"Thought the last pitch was probably up. Thought there was a pitch maybe with Clarke earlier in the inning that we had him, another close one," Boone said. "It was more just making sure (catcher) Jose (Trevino) didn't get in any trouble out there."

Joey Krehbiel (1-0) earned his first major league win, part of a stellar performance by a bullpen that's been surprisingly effective this season.

Giancarlo Stanton had three hits for the Yankees, although he was credited with the last one leading off the 11th when his routine-looking grounder hit Anthony Rizzo, the automatic runner, between second and third. That meant Rizzo was out and Stanton took first. That was the only batter to reach base against the Baltimore relievers, but the play hurt New York's chances even more.

New York went 2 for 11 with runners in scoring position.

"We had a tough night tonight, but we're all right," Yankees infielder DJ LeMahieu said. "I think we had a pretty good homestand offensively."

Stanton's RBI single in the third brought in the game's first run. Kyle Higashioka, who was 1 for 18 entering the game, led off the third with a double. After moving to third on Rizzo's groundout, he scored on Stanton's broken-bat single.

New York pitched shutouts in two of its previous three games, but the bid for another ended in the seventh when Austin Hays led off with a double, went to third on a passed ball and scored on Jorge Mateo's single.

The Yankees missed a great chance to add to their lead in the sixth. After two singles and a walk, Lyles left the game with the bases loaded and one out. Dillon Tate relieved him, and Aaron Hicks bounced into a double play.

"They were dominant," Lyles said. "Anything and everything you could ask for a bullpen. They were electric."

ONE OR THE OTHER

During a stretch in the seventh and eighth, the Orioles went a full time through the batting order - nine straight hitters - with only walks and strikeouts. They had four walks and five strikeouts.

Baltimore is 6 for 70 with men in scoring position this season.

Orioles: LHP John Means went on the 10-day injured list. The team announced that Means had a strained left elbow. Manager Brandon Hyde described the injury as a forearm muscle strain, but he said more tests were coming to look at the elbow.

Jameson Taillon (0-1) takes the mound for the Yankees against Baltimore's Tyler Wells (0-1) on Saturday night. It will be the first home start of Wells' career.