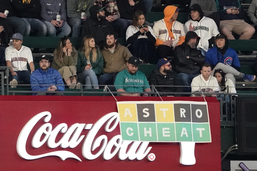 SEATTLE (AP) Marco Gonzales took great pleasure in shutting down one of the teams that's provided him headaches in the past before a sold-out home crowd.

Adam Frazier's first impression to those same fans was just as memorable.

Gonzales rebounded from a rocky first start to throw seven solid innings, Frazier had four hits, including a two-run triple and two-run double, and the Mariners opened their home campaign with a 11-1 win over the Houston Astros on Friday night.

An offseason of high anticipation for fans in the Pacific Northwest was greeted with a complete performance by the Mariners in their first appearance at T-Mobile Park since the final day of last season, when Seattle was eliminated from the postseason race.

Gonzales (1-1) was terrific with one of the best outings of his career against the Astros. The top of Seattle's lineup with Frazier, Ty France and Jesse Winker was a combined 7 for 11 with seven RBIs and three walks. Even promising rookie Julio Rodriguez thrilled the sellout crowd in his first home game with the Mariners by dumping a line drive single into left field in his first plate appearance.

Gonzales scattered four hits and struck out six. He lasted just two innings in his first start of the season last weekend against Minnesota when he allowed six runs, but only two were earned.

"Getting ahead in the count, throwing five different pitches for strikes and pitching with a little bit of a chip on my shoulder," Gonzales said. "These guys smacked me around for a long time. So (it) felt good to stick it to them a little bit."

The only run Gonzales surrendered this time came in the seventh when Jose Siri's broken-bat liner to center dropped in front of Rodriguez and scored Yuli Gurriel.

"I felt very confident coming into the game today he would make an adjustment," Seattle manager Scott Servais said of Gonzales. "His stuff was so much crisper and just so aggressive early in the strike zone, and we'd love to see that. That's who Marco is."

It was Frazier's third career game with four RBIs. Eugenio Suarez added a two-run homer in the eighth inning.

"I felt like I had some tough luck on the road. First road trip, I guess," Frazier said. "I felt good coming out of spring then felt like I lost it a little bit. So, try to build on tonight."

Ichiro Suzuki threw out the ceremonial first pitch. Suzuki, who still works as an instructor for the Mariners and is at the ballpark most days, came out in a full uniform to throw the first pitch to Rodriguez.

Seattle is inducting Suzuki into the Mariners' Hall of Fame in August.

Frazier was the first Seattle leadoff hitter with four hits and four RBIs in a game since Suzuki did it on Aug. 17, 2004.

Astros: Houston placed DH Yordan Alvarez on the injured list due to "health and safety protocols." Baker said Alvarez was with the team in Seattle and had not tested positive for COVID-19, but he was feeling under the weather. Alvarez has not played since the final day of the Astros opening series against the Angels, missing all games in Arizona. Baker said Alvarez will likely need a couple of days once he's feeling well enough to be back with the team. Houston recalled IF Joe Perez from Double-A Corpus Christi.

Mariners: RHP Chris Flexen (0-1, 6.23) makes his second start. Flexen allowed three earned runs in 4 1/3 innings in his first outing against Minnesota. He is 0-3 with a 7.78 ERA in four career starts vs. Houston.