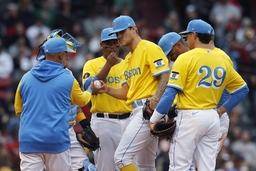 BOSTON (AP) There was a bit of concern trailing Xander Bogaerts and Alex Verdugo entering the season after they were each virtually ice cold from the plate this spring.

They're hoping some swings they made on Saturday are a sign their bats will be heating up.

"I made a swing that felt good. I'm getting there," said Bogaerts, who had his first homer after posting just three hits in 22 at-bats during the truncated exhibition season.

Verdugo now has three home runs after a 4-for-26 spring in which he also failed to go deep. But he said he is isn't focused on hitting for power.

"I feel like each year I always try to say I'm gonna try to hit 30 and I hit like 12," Verdugo said. "So this year it's been the other way around. Just trying to hit the ball hard, as many doubles as I can, and just finding it at the moment they're carrying a little farther."

Meanwhile, Houck (1-0) was solid, allowing just two hits and three walks while striking out four. Matt Straham got the next three outs and Garrett Whitlock gave up just two hits while retiring the final seven.

"Made some adjustments I was super happy with," Houck said. "Continuing to grow and take steps in the right direction."

The Twins left six runners on base and were held scoreless for the second time in three games.

Minnesota starter Sonny Gray (O-1) allowed a homer to Verdugo in the second inning before being pulled two batters later with right hamstring tightness. Gray tossed just 31 pitches, with a walk and one strikeout.

Manager Rocco Baldelli said it's one of the perks of having seven starting pitchers on the opening day roster.

"I think we're gonna be able to move forward in one way, shape or form and not have to make any large-scale maneuvers here," he said. "You anticipate things happening, you don't know what they're gonna be. But you just have to be prepared for these things, especially in a year like this."

Boston took a 2-0 lead when Verdugo drove a sinker from Gray over the short wall in center field. Gray got Trevor Story and Bobby Dalbec to pop out, but he then summoned the training staff and after a brief conversation at the mound with head trainer Michael Salazar and manager Rocco Baldelli he exited in favor of Winder. A replay showed Gray wincing after his final pitch to Dalbec.

The Twins looked to have something going in the third after Nick Gordon and Miguel Sano got on via a walk and single to begin the inning. But Houck was able to work his way out of the jam, getting Ryan Jeffers to hit into a double play and Luis Arraez on a groundout to end the threat.

Bogaerts made the Twins pay for the missed opportunity in the bottom of the inning, belting a two-run blast over the Green Monster off Winder for his first home run of the season.

Twins: Baldelli said an MRI on Twins star Byron Buxton's right knee didn't reveal any structural issues. A team doctor will examine him as well, but they anticipate he'll be traveling with the team for their next series at Kansas City. Baldelli said they aren't anticipating making a roster move for now.

Red Sox: LHP Josh Taylor (lower back strain) is scheduled to begin about a five-game rehab assignment Sunday at Triple-A Worcester. . LHP James Paxton (Tommy John surgery rehab) tossed a bullpen session. He and LHP Chris Sale will return to the training facility in Florida when the team travels to Tampa Bay to open its series with the Rays on April 22.

Twins: Rookie RHP Bailey Ober (1-0, 7.20 ERA) is coming off earning a win in his season debut against Seattle in which he allowed four runs off four hits over five innings. He had a no-decision in his only start against Boston last season, tossing five scoreless innings.