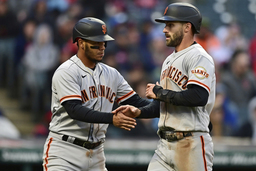 CLEVELAND (AP) Brandon Belt scored the go-ahead run on a bases-loaded grounder by Wilmer Flores in the eighth inning, sending the San Francisco Giants to a 4-2 victory over the Cleveland Guardians on Saturday night.

With one out, Flores hit a sharp grounder that second baseman Ernie Clement stopped before forcing out Brandon Crawford at second. But shortstop Amed Rosario had to delay his throw to first when first baseman Owen Miller was late getting to the bag, allowing Flores to reach and extend the inning.

"I thought that was a double play when it was hit," Belt admitted. "But give Flo credit. If he isn't giving it all he's got getting down the line, we don't score that run there."

Austin Slater subsequently scored on a wild pitch by Nick Sandlin (0-1) to extend San Francisco's lead to two. Belt went 2 for 5 with a pair of RBIs for the Giants, who have won four in a row and are atop the NL West.

"All of Brandon's at-bats are high quality and you can sense confidence in his swings," San Francisco manager Gabe Kapler said. "Obviously, he's off to a great start and we're not in the position we are without him."

Dominic Leone (1-0) worked a scoreless seventh for the win and Jake McGee earned his first save of the season. The Giants are 2-0 on an 11-game road trip that continues against the Mets, Nationals and Brewers.

Myles Straw had a leadoff triple and scored in the first, then doubled home the tying run in the fifth for the Guardians. Miller went 2 for 2, raising his major league-leading batting average to .560. He has an extra-base hit in six straight games.

"Owen is impacting the ball," Cleveland manager Terry Francona said. "From day one of spring training, man, he's hitting balls and he's turning on balls that we didn't see him do last year."

Jose Ramirez drove in Straw with a sacrifice fly for his league-high 15th RBI. Straw brought home Miller against Giants starter Anthony DeSclafani to even the game at 2.

Belt greeted Logan Allen with a two-run single in the fifth, putting San Francisco in front 2-1. Thairo Estrada and Steven Duggar came home on the two-out liner after getting the only two hits off Guardians starter Cal Quantrill.

"I thought we managed the game well, given the fact that I didn't really think I was throwing the ball very well," said Quantrill, who struck out two and walked three in 4 2/3 innings. "I didn't really give myself a chance to go deep."

DeSclafani gave up two runs in 4 2/3 innings, striking out four. He entered with a 2.33 career ERA in April, the seventh-lowest among all pitchers with 15 starts since 1920.

"I still felt good, but Gabe thought it was best to go with the fresh bullpen we have," DeSclafani said. "It was the right move because we won."

Cleveland's Josh Naylor had his first two hits since breaking his right leg in a gruesome outfield collision on June 27, 2021. Guardians rookie Steven Kwan went 0 for 4, dropping his average to .385.

Guardians LHP Anthony Gose struck out two and walked one in a three-batter outing in the series opener. The 31-year-old reliever was an outfielder with Toronto and Detroit from 2012-16, then returned to the majors last year on the mound. "Having a player development background, I think it's super cool that (Cleveland) identified something else in him," Kapler said. "Of course, having an electric arm helps."

Giants: 3B Evan Longoria (right index finger surgery) is scheduled to begin hitting drills in the next several days. Longoria underwent a procedure to repair a torn ligament on March 29 and is fielding balls with his glove hand, but has yet to resume throwing.

Guardians: RHP James Karinchak (right back strain), who has been on the 10-day injured list since April 4, will throw off a mound after completing one final long toss session. "He wants one more really, really long toss - his words," Francona said.