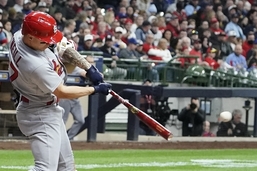 MILWAUKEE (AP) Steven Matz bounced back from a dreadful debut with his new team and showed just why the St. Louis Cardinals signed him.

He pitched 5 2/3 shutout innings and combined with three relievers on a five-hitter as the Cardinals edged the Milwaukee Brewers 2-1 on Saturday night.

"He's just a high-character dude, very professional and unmatched work ethic," Cardinals manager Oliver Marmol said. "When you combine those things, you have a guy that's going to be itching to get back out there and prove what he's capable of doing."

The Cardinals signed Matz to a four-year, $44 million contract after he went 14-7 with a 3.82 ERA for Toronto last season. He lasted only three innings and allowed seven earned runs Sunday in a 9-4 loss to the Pittsburgh Pirates.

"When you come in to a new organization, you want to come in and contribute right away," Matz said. "It was frustrating after that outing, but I'm just glad I could contribute today to get the win."

He was much, much better Saturday.

Matz retired 11 straight batters at one point. The 30-year-old left-hander struck out six, allowed three hits and walked nobody as St. Louis limited the Brewers to one run for a second straight night. The Cardinals won 10-1 on Friday.

"I don't see pressing going on," Brewers manager Craig Counsell said. "I think we have to create a little more offense, for sure. When we get pitches to hit, we have to do something with them."

The Brewers tried to rally in the final two innings.

After Mike Brosseau hit an eighth-inning drive to right that Dylan Carlson caught in front of the wall, Victor Caratini ripped a two-out solo shot to left off Genesis Cabrera that cut the Cardinals' lead to 2-1.

Giovanny Gallegos struck out Andrew McCutchen to end the eighth and worked around Willy Adames' leadoff single in the ninth to earn his second save in as many opportunities.

The game ended when Rowdy Tellez hit into an unusual 4-5-3 double play in which third baseman Nolan Arenado covered second base with the Cardinals in a shift.

"It was awesome," Marmol said. "The guys actually practice that in the shift, work on it quite a bit. To see it come into play there, (it's) a good way to end the game."

The Cardinals needed Matz to pitch well Saturday because they didn't figure to produce much offense against Brewers starter Adrian Houser.

Houser went 3-0 with an 0.36 ERA in four starts against the Cardinals last season. He allowed just one run and four hits in 5 2/3 innings Saturday with four strikeouts and three walks.

But his occasional control issues - he threw 54 strikes and 43 balls - proved costly in the fourth inning.

"I just got out of sync a little bit with my mechanics," Houser said. "I was rushing a little bit. I wasn't keeping my hands close to my body or staying inside myself. Things went a little haywire there, and the walks obviously killed me."

The Cardinals extended the lead to 2-0 in the eighth when Corey Dickerson's two-out single off Jake Cousins brought home Arenado.

Those two runs were all the Cardinals needed on a night when Matz proved his worth.

"The guy's a competitor," Marmol said. "He wasn't happy at all with how the last outing went, so he went out there and he wanted to make a point and establish in and show he was in control."

Cardinals: C Yadier Molina was out of the lineup for a second straight day, but Marmol said the 39-year-old isn't feeling any different from normal. The Cardinals are just resting him a little more after an abbreviated spring. "We'll ease him in," Marmol said. "I think the long haul, playing the long game here is a better play than rushing him in."

Brewers: LHP Brent Suter worked the ninth inning one night after a scary incident in which he ran into the railing in front of the Cardinals dugout while chasing a foul pop. "He just lost himself on the field a little bit, and obviously it's not a play that pitchers are required to make very much," Counsell said before the game. "Frankly, we got lucky that he's OK."