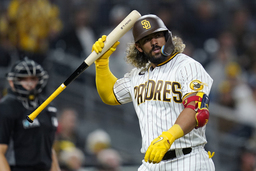 SAN DIEGO (AP) Other than three pitches to Tommy Pham, newcomer Sean Manaea did just fine in his home debut with the San Diego Padres.

Manaea pitched six strong innings and Manny Machado had a two-run homer among his three hits for the Padres, who won 4-1 on Monday night to hand the Cincinnati Reds their seventh straight loss.

The Padres extended their major league record with 12 consecutive errorless games to open a season.

The Reds took a rare lead when Pham, who played for the Padres the past two seasons before leaving as a free agent, hit a solo homer with two outs in the first. It was his first of the season and doubled his hit total. Pham finished with three hits.

That was the extent of the Reds' scoring, though. The Padres came right back when Austin Nola hit a leadoff single and Machado followed with a line-shot homer to left field, his second, off Nick Lodolo (0-2), who was making his second big league start.

"I definitely battled through a lot of stuff and the Reds were definitely putting the bat on the ball and making me work, but I got out of some tough jams and the defense was good, as usual," Manaea said. "It was a lot of fun.

Manaea (2-1) held Cincinnati to six hits, struck out six and walked two. Taylor Rogers pitched the ninth for his fifth save in as many chances.

Manaea was obtained from Oakland late in spring training. Padres manager Bob Melvin said Manaea has been on regular rest since spring training and he wasn't going to let him throw more than 80 pitches. The big left-hander threw 78.

"He's been working pretty hard," Melvin said. "One thing he's done over his career is he's been able to find a way to pitch when his best velocity is not there and that's what you saw again tonight. It doesn't take your best stuff to go out there and perform well and he did that tonight."

"It just looks like he plays the game at a different pace than anybody else, because it's so easy, it's effortless, there's no tension in his game," Melvin said of Machado. "You see the consistent numbers every year and what he means to this team and the big hits that he gets. In some of these low-scoring games he's been the guy that's been prominent. This team relies on him a lot."

Padres: Relief pitcher Austin Adams has a strained right forearm and will be shut down for at least six weeks, Melvin said. ... Fernando Tatis Jr., on the IL with a fractured left wrist, made some throws at shortstop. Melvin said he saw the video of Tatis tripping while playing soccer in the outfield before Sunday night's game. "Visually maybe not the best look," Melvin said. "I talked to him a little bit about that, but he's trying to get a little bit of conditioning. He is protected as far as the hand goes."