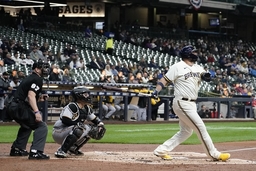 MILWAUKEE (AP) Three hits were all the Milwaukee Brewers needed to get reigning NL Cy Young Award winner Corbin Burnes his first win of the season.

Burnes struck out 10 and allowed two runs in seven innings as the Brewers defeated the Pittsburgh Pirates 5-2 on Tuesday night for their third straight victory. Burnes held the Pirates scoreless through five innings before giving up homers to Daniel Vogelbach in the sixth and Josh VanMeter in the seventh.

The Brewers were held to a season-low three hits, but two of them were homers by Rowdy Tellez and Hunter Renfroe. The Pirates had a season-low four hits.

"If we hit home runs, it's going to be OK," Milwaukee manager Craig Counsell said. "We got some balls to hit, and we did some damage with the balls we got to hit. They pitched well."

The right-hander gave up four hits and didn't walk anybody. In his last two starts, Burnes (1-0) has allowed just seven hits and two runs over 14 innings.

"That's what he does," Brewers reliever Devin Williams said. "That's what we've grown to expect every time. It's really not surprising."

In his previous start, Burnes permitted three hits in seven shutout innings and left with a 2-0 lead, but the Orioles rallied to tie the game against Williams in the eighth before the Brewers eventually won 4-2.

This time, the Brewers' bullpen had no such issues.

After Williams retired the side in order in the eighth, Josh Hader did the same in the ninth to earn his fifth save in as many opportunities. Williams entered the night having allowed two runs in each of his last two outings.

"It's a step in the right direction," Williams said. "My mindset was just to get in there and throw strikes. I've been falling behind a lot, so that was my main objective today."

The Brewers' only two hits off Pirates starter JT Brubaker came during a four-run outburst in the second. Milwaukee capitalized on two walks and an error in that inning.

After Andrew McCutchen drew a leadoff walk, Tellez got ahead in the count 2-0 and drove an 88 mph slider into the second deck of the right-field stands.

Two outs later, Lorenzo Cain reached first on a grounder to shortstop Kevin Newman, whose throw to first pulled Yoshi Tsutsugo off the bag. Victor Caratini walked to keep the inning going, then Kolten Wong hit a blooper down the line in shallow right for a two-run double.

Brubaker (0-2) settled down from there and retired the last 10 batters he faced. Two of the four runs he allowed were unearned.

"I lost the zone there in the second, and it hurt me," Brubaker said.

After the Pirates cut the lead to 4-2 on the homers to center by Vogelbach and VanMeter, Renfroe led off the bottom of the seventh by sending a 1-1 pitch from Roansy Contreras into the second deck of the left-field stands.

The homer was Renfroe's first with the Brewers. He had 31 homers and 96 RBIs for the Boston Red Sox last season before getting traded to Milwaukee.

"I feel like that was the third or fourth one that I thought I hit out, and this was probably the slowest one of the four," Renfroe said. "Just better aim, I guess. It was great to get it out of the way."

Counsell said 3B Luis Urias will play an extended spring training game Thursday in Arizona. If all goes well, Urias will begin a rehab assignment with one of the club's minor league affiliates. Urias hasn't played yet this season due to a quadriceps injury.

The three-game series concludes Wednesday afternoon with a matchup of right-handers as Mitch Keller (0-2, 9.39 ERA) starts for the Pirates against Brandon Woodruff (1-1, 7.27).