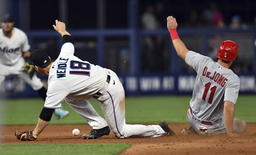 Albert Pujols had two hits and scored twice as the St. Louis Cardinals beat the Miami Marlins 5-1 on Tuesday night.

Adam Wainwright (2-1) allowed one run and five hits in 5 2/3 innings with six strikeouts and two walks.

Now getting some playing time as a designated hitter in his return to the Cardinals, Pujols is 6 for 9 against left-handers.

"He's taking really good at bats, specifically against left-handers," St. Louis manager Oliver Marmol said. "He feels good about it and we feel equally as good about it. He understands how to attack a lefty, shown it through his career."

"Sounded like a lot of missed spots for the most part, with the ball getting over the middle of the plate and not getting the height that he wanted," Miami manager Don Mattingly said of Luzardo's outing.

Wainwright walked two in the first inning, then settled down after third baseman Nolan Arenado reached near the foul line to grab Avisail Garcia's hard grounder and made a long throw to Goldschmidt. The first baseman stretched to catch Arenado's throw and get Garcia and end the early Marlins threat.

"Nothing surprising from our defense, that's why we have the best defense in the league," Wainwright said. "They are incredible every night. Nolan ran two or three miles throwing that ball. It's so much to watch these guys work."

Tyler O'Neill had an RBI single in the third before Pujols singled and raced home from first on Edman's triple to right-center.

Edman added a run-scoring single in the fifth.

Wainwright and Molina made their 307th start together, surpassing the Chicago White Sox battery of Red Faber and Ray Schalk for third most in a big league career.

"I still have some work to do on fastball command," Wainwright said. "But I threw some good pitches when I needed to tonight."

Relievers T.J. McFarland and Ryan Helsley got the next seven outs around three hits and Giovanny Gallegos worked a perfect ninth.

Marlins:: Garcia was removed from the game in the sixth inning due to an upset stomach. ... RHP Dylan Floro (right rotator cuff tendinitis) threw live batting practice Sunday and will pitch Wednesday in extended spring training.

POWER IN THE MINORS

Cardinals prospect Nolan Gorman homered for the seventh time in seven games for for Triple-A Memphis.

Marmol managed his first major league game in Miami. It was also the city where Marmol watched his first game, attending as part of a school field trip. Marmol and his family lived in Miami three years during the mid-1990s before settling in Orlando.