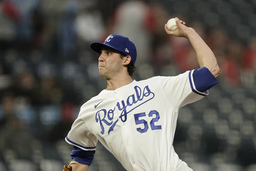 KANSAS CITY, Mo. (AP) Daniel Lynch was pitching so well into the sixth inning Wednesday night that Royals manager Mike Matheny would've left him in the game against Minnesota had the Kansas City offense provided a little more support.

Two runs turned out to be plenty for Matheny's bullpen, though.

Four relievers followed Lynch, each delivering a shutout frame, and the Royals held on for a 2-0 victory over the Twins on a dreary night at Kauffman Stadium that saw fewer than 9,000 fans walk through the gates.

"Just that great mix of pitching, bullpen and defense is everything you could want," Matheny said.

Lynch (1-1) bounced back from a dismal season debut against St. Louis, when he served up three homers to Kansas City's cross-state rival, to win a pitchers' duel against Chris Paddack (0-2) and the equally stout Minnesota bullpen.

Lynch never allowed a runner to reach third, getting plenty of help along the way from one of two big league defenses - the Padres have the other - that have yet to commit an error this season. Collin Snider, Jake Brentz and Josh Staumont got the lead to Scott Barlow, who worked around a single in the ninth for his first save of the season.

"I'd have liked to have had a little bigger lead and just let Daniel keep pitching," said Matheny, whose bullpen has thrown 17 1/3 consecutive scoreless innings. "It's a little easier to swallow when you can watch those guys do what they do."

The Twins have lost four of their last five on a trip through Boston and Kansas City. They also were shut out for the third time this season, matching Arizona for the most in the majors, and have not scored in their last 13 innings.

"We're seeing the ball. We're taking a good amount of walks," said Twins designated hitter Ryan Jeffers, who went 0 for 3 with two strikeouts. "But when it comes to hits, we're not getting them right now."

The Royals scored in the first inning when Bobby Witt Jr. grounded into a double play and Whit Merrifield scampered home from third, but nobody else crossed the plate until Kansas City strung together three singles in the fifth.

The last of them, a bunt by Adalberto Mondesi, got through the right side of a drawn-in infield to bring in a run.

Paddack escaped further damage by striking out Cam Gallagher and getting Merrifield to pop into foul territory. He was replaced for the sixth after allowing the game's only two runs on five hits without a walk while striking out four.

Lynch gave up a leadoff single in the sixth before he was done. Along with four hits, he walked one and struck out two.

"Obviously as much as I say I don't want to focus on results, results are reality," Lynch said. "I just wanted to keep us in the game and give us a chance."

While the young left-hander was excellent, the Kansas City bullpen may have been better. It added four more innings to its impressive scoreless streak, and helped the Royals even their record at 5-5 in yet another close game.

Eight of their first 10 this season have been decided by two runs or fewer.

"The best way to describe the bullpen right now is dominant," Lynch said. "It's like everyone seems to be pitching well."

The Royals clinched their first series win through four series this season. It also was their first shutout of the Twins since August 20, 2016. ... Mondesi has not committed an error in his last 71 games at shortstop dating to August 2, 2020, one shy of the franchise record at the position set by teammate Nicky Lopez from May to August of last season. ... Paddack has not walked any of the 39 batters he has faced for Minnesota this season.

Twins: CF Byron Buxton (right knee) did some fielding work away from Kauffman Stadium early Wednesday so he could avoid the slippery natural grass surface. He has so far avoided the injury list. "If we can give someone a day or two or three to see if Buxton is going to come back, we're going to do that," Twins manager Rocco Baldelli said.

Royals: C Salvador Perez got another day off from the field after treatment to drain fluid from his eye. He hit two homers as the DH on Tuesday night and had a single Wednesday. "He knows how he feels," Matheny said.

Twins RHP Joe Ryan (1-0, 2.70 ERA) tries to build on a dynamic debut against Boston, when he allowed one run on five hits over six innings, when he takes the mound for the series finale Thursday. Royals RHP Zack Greinke (0-0, 2.45) tries again for his first win since returning to the club that drafted him two decades ago.