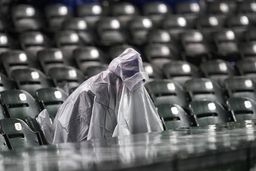 CHICAGO (AP) Francisco Mejia homered and drove in three runs to help the Tampa Bay Rays beat the Chicago Cubs 8-2 on Wednesday night in a game that was called after 5 1/2 innings due to rain.

First pitch was moved up 70 minutes because rain was forecast for later on a chilly evening. The game was then delayed in the middle of the sixth inning when the rain intensified. It was called just over an hour later.

The window provided enough time for the Rays (7-6), who struck early and climbed back over .500 with their third win in four games.

"Get runs and then get through the fifth inning, it kind of felt like," Tampa Bay manager Kevin Cash said.

Added Mejia through a translator: "Our job was to attack early because we didn't know if we were going to be able to finish the game at all."

Josh Lowe had a triple, double and RBI. Randy Arozarena, Wander Franco and Kevin Kiermaier each doubled in runs to help the Rays finish 3-3 in Chicago in back-to-back series against the White Sox and Cubs.

"We're a really good hitting group" Lowe said. "We're just kind of feeding off each other's energy. You go up to the plate and hitting's contagious, and we're ready to keep this thing going."

Despite unseasonably cool weather in Chicago, the Rays' offense is starting to roll after a slow start and a four-game losing streak last week.

"We think the way we're built, we should be able to put runs up on the board," Cash said. "We've got a versatile lineup, a very deep lineup. We feel like we can put a lot of pressure on pitchers and today was a good example of that."

Cubs rookie Seiya Suzuki walked in the fifth to reach base for the 12th straight game at the start of his career, breaking a team record held by two players - Art Williams in 1902 and Tony Taylor in 1958.

Suzuki started the season with a nine-game hitting streak that matched the longest from the from the start of a career by a Japanese-born player, set by Akinori Iwamura with Tampa Bay in 2007. Suzuki was hitless in this one before being replaced in right by Michael Hermosillo in the top of the sixth.

Frank Schwindel drove in a run with a double and Nick Madrigal had Chicago's other RBI as the Cubs dropped their second straight to Tampa Bay.

Marcus Stroman (0-2) allowed eight runs, seven earned, in his second straight rocky start and loss. The right-hander was tagged for eight hits, including five for extra bases, while striking out seven and walking two.

"Just off right now," Stroman said "Just a mess a bit mechanically. Can't find any rhythm. Every pitch essentially feels like I'm doing something different mechanically. I feel great for an inning or a few batters and then kind of just lose it. It's frustrating. It's beyond frustrating."

The Rays jumped ahead 4-0 in the first inning.

Arozarena doubled in the first run, then scored on Yan Gomes' throwing error after he stole third. Mejia's two-run shot to the left-center bleachers made it 4-0. Franco's RBI double in the second made it 5-0.

The Cubs cut it to 5-2 in the third on Schwindel's double and Madrigal's groundout.

The Rays pulled away with three runs on the fifth on consecutive extra-base hits by Lowe, Mejia and Kiermaier.

After the game, the Cubs announced they acquired LHP Sean Newcomb from Atlanta for RHP Jesse Chavez and a cash consideration.

The 6-foot-5 Newcomb made 32 appearances out of the bullpen for Atlanta last year. This season, the 28-year-old is 0-0 with a 7.20 ERA over five innings in three games.

Chavez was 0-0 with 6.35 ERA in three games with the Cubs this season.

Franco, the Rays 21-year-old shortstop, had 19 hits entering the game to lead the majors. He added a double in four at-bats on Wednesday. The switch-hitting Dominican has four three-hit games so far, including Tuesday at Wrigley Field.

Rays: LHP Ryan Yarbrough (left groin) is scheduled to make a rehab appearance for Triple-A Durham on Saturday. Yarbrough (9-7 in 21 starts last season) has been on the 10-day injured list since April 11. . RHP Nick Anderson (right elbow surgery) threw off the mound on Wednesday. He's been out since September.

Rays: Return home to host Boston for a three-game series starting Friday. RHP Corey Kluber (1-0, 1.86) will start in the opener.